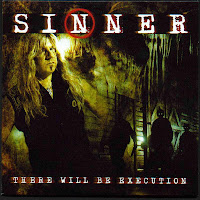 It's a sad fact that most people will recognize Mat Sinner only from his great work with Primal Fear. Granted, that is an excellent band, but his mainstay has existed for nearly three decades now, with 15 full-lengths to date! Many of the early works had that 80s hard rock, but near the end of the 20th century it started to take on a more current, power metal approach (and only recently the band has gone back to a medium between the two). There Will Be Execution was the band's 13th album and perhaps the best overall example of the 'power metal' period.

"Higher Level of Violence" begins with an immediate appeal to fans of the entire Priest/Accept school of German power metal championed by bands like Iron Savior, Primal Fear, and the like. The riffs are powerful and busy, with flourishes of hard rocking guitar squeal flair. The title track is second on the roster, powered by its anthem of a lead riff and a killer solo bridge. "Locked & Loaded" is shit kicking heavy metal, once again inspired by the band's earlier phase yet still locked in the power mindset. "God Raises the Dead" might as well just have Ralph Scheepers singing over it, it's a perfect little Primal Fear sounding number. "The River" is a bluesier, semi-ballad but pretty cool. Other winners include the mean rocking of "Black Monday" and "Liberty of Death".

In all, it's a solid record, with the only annoying moments being a brief plead to Jesus in "Liberty of Death" (Sinner is not a Christian metal band, this was more just part of the lyrics, but cheesy nonetheless). There is a loose concept here about religious sin and violence that permeates many of the lyrics, but their lyrics have never been very good anyways. But at least they are pretty serious business on this album. Regardless of these minor gripes the album is a success for Sinner and one of their very best.