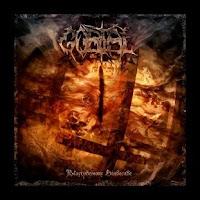 After a slew of demos in the 21st century, Poland's Gortal arrives with its first full-length album, an extreme affair with an inhuman bombardment of drumming, yet the same emphasis on songwriting which ties them to their countrymen and separates them from the majority of dull, brutal bands everywhere. Just enough in this case.

"Perversity Rites", the first proper song on this album, did little for me, it's a blasting piece with some dull breakdowns. Gortal uses a pattern of vocals not unlike Deicide, grunts for the most part but very often they are accompanied by snarls. I was pleased to find the second track a lot better. "Black Purest Desecration" is propelled by some 'how the fuck did he do that' double bass from Desecrator. The speed flows into this sick groove in the middle with some creepy effects over the echo of the growls. Sick. "Forgotten Writing" has some pretty sweet, Arabesque death riffing under the lead which works nicely. "Unleash Hell" and "Deathamation" are both decent tracks with some great mid sections. "Obscene Nazarene" is perhaps the best overall track on the album. In the end, there is enough quality here to win the death metal fan over.

The mix on the album is fair, the vocals are present along with the very chunky guitar sound. I would have liked a little more from the bass, it's faintly audible with a little distortion on it. The songs aren't quite at the catchy level of a Vader or Decapitated, but not for the lack of trying. Gortal is an impressive band technically, some of them are/were members of Pyorrhoea so they are no strangers to the form. The first track is the worst on the album, once you get past that you're in for yet another shiny nugget in the ever widening Polish goldmine.