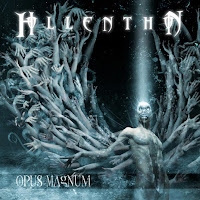 It would be practically impossible to top's Hollenthon's masterful With Vilest of Worms to Dwell, thus the title to this third album is misleading. This is not With Vilest of Worms to Dwell. That said, it's still an excellent record which should appeal to the fans of the dark side of symphonic metal, ala Therion (or perhaps the latest album from Sigh). Why this band was shelved for Martin to return to his less impressive main band Pungent Stench is beyond me, but here it is alas, and I am not complaining.

"Ars Moriendi" begins with the symphonic elements and sweeping gothic chorus which recall the first album Domvs Mvndi or mid to late period Therion. "Of Splendid Worlds" leads off with a slow and glorious riff, accented by slight orchestral touches which almost feel playful. It then leads into choral parts with a little more female influence. "Once We Were Kings" is mighty with its 'hwah hwah' and very simple, groovy metal structure. "To Fabled Lands" is one of my clear favorites with its epic, fantasy feel and haunting female wails. "Dying Embers" has a slightly arabesque twang to it. "Misterium Babel" is both epic and operatic amidst its climbing and descending riffs. "On the Wings of a Dove" starts softly with a folkish bliss and then a return to the very Therion sounding choral metal. "Son of Perdition" features more haunting female vocals and is another of my favorites on the album (Martin's wife Elena provides many of the female vocals on the album).

Opus Magnum is another winner for Hollenthon, but it's not quite perfect. There is no "Y Draig Goch" here or "Fire Upon the Blade", it's simply not as amazing as their first two albums were. But in this very narrow field of darker symphonic black/death metal, they are still at the top of the chain.