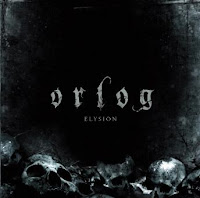 The debut from Orlog, Reinigende Feuer, was one of the most promising albums to come along in the already crowded field of German black metal. Taking its queues from the extreme Norse and Swedish scene, it offered fast and punishing material.

The follow-up Elysion has arrived, and it doesn't disappoint. A frenzy of hostile and cold black metal which should appeal to the fan of Marduk, Naglfar, Emperor, 1349 and Dark Funeral. The mix is very distant yet clear, perfect for this style. "Sturm" thunders out of the starting gates with some ripping guitars which erupt into a firm blast beat. The song remains evil throughout, with some nice lead touches. "Im Schattenrausch" starts with a slower, pensive crawl and some lush, nightmarish melodies before stirring up a hornets' nest of heinous darkness. "Das Licht Der Toten Welt" has a glorious, slow pace to it which makes you want to ride to your death under a banner of blood, before the inevitable charge. This too has some great leadwork in the middle, really contributing an atmosphere that makes this so much more than your typical black metal record. The rest of the album is consistently excelletn, "Entfesselt" is the sonic equivalent to madness. "Fluch" alternates between scintillating, evil melodic subcurrent and pure vile Scandinavian black metal. The title track ends with a barrage of everything that made the rest of the album so good.

Elysion is a stunning sophomore album that places Orlog far up the food chain. They may just be the best black metal band in Germany, or at least rivaling other favorites like Eternity and Dark Fortress. If you are a fan of ANY extreme black metal, whether it be the German scene or its Scandinavian forebears, you owe it to yourself to track this down and revel in its adventurous, grim spirit. Intense and captivating.