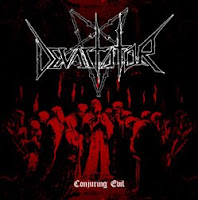 I'll say one thing for Devastator, they really like to revel in their grim, thrashing black metal. This is their fourth album in about as many years, and while the foreboding, cool cover to the album had me hopeful, it winds up just as mediocre as the rest.

First off, you have to establish that this is some lo-fi, raw material. That's not actually a problem here, you can hear the guitars, bass, tinny drums and the morbid vocals. But the production does little to paint the songs with any vibrance or enthusiasm, and it's one of the reasons they feel a little flat.

Beyond the production itself, the songs just aren't very good. Heavily rooted in the classic, filthy prototypical black metal of Venom, Kreator, Possessed and Bathory they speed along with little to no intensity. The drums are basically phoned in, the riffs are never catchy despite their loyalty to this retro sound. A few tracks seem to almost break this ennui, such as "Pazuzu, Demon of Plagues" and "Summon the Night", but it simply isn't happening. You could honestly pick up any Sabbat (Japan) album and hear this same retro style done a thousand times better.

Make no mistake about it: these guys love their fucking metal. They obvious have great tastes. Conjuring Evil is a celebration of that fact. The production, tormenting vocals and crispy speed riffing all make it sound suitably old school. That's kind of the point. But it just lacks the charisma and songwriting which made all those old records great to begin with. I'd like to hear a little more from these guys than some bullet belts and good (i.e. vile) intentions.