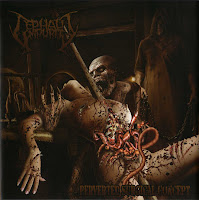 Here's another debut from another Russian band performing gore-soaked death metal and grind, though leaning to the former here. While on first pass this sounds like any other brutal and guttural slop, the album is actually pretty impressive. It takes a bare bones approach to the material and ends up succeeding with some good riffs.

One of the high points here is the great production on the album, it's got this dense, low atmosphere which really makes for some punishing guitar riffing. The vocals here are pretty extreme, don't expect to understand a damn thing he's seeing, but they are effective as a form of percussion. Also as sick as I might seem I thought the cover art was hot.

Quality of the tracks is consistent, but some names I remember are "Cruel Lobotomic Punishment", "Atrocious Avidity" and "Cerebral Vomiting". "Indefectible Murder" is really good! Songwriting is tight throughout, pushing them well past many of their peers, who seem to be more enamored of sheer brutality and simply existing, than doing a decent job like Cephalic Impurity have done. These guys aren't about to set any records, but they are easily worth a listen for the fan of guttural slam death, and I look forward to hearing more.