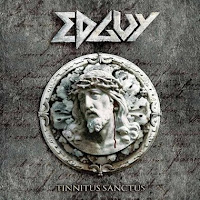 I'm going to come clean and say that I'm not a big fan of this classic, dirty hard rock phase of Edguy's career. It's always been present in their sound to some extent, but I'm much more a fan of their earliest few albums when they were doing the power metal thing. In fact the last album I enjoyed was Mandrake.

Well, at its very best, Tinnitus Sanctus recalls moments of UK heavy metal bands from the 80s, like Saxon, hard rock Black Sabbath, or even early Wolfsbane. There are a few tracks like "Nine Lives" or "Dead or Rock" which are actually fairly catchy. But there's just too much of that rah rah hard rocker vibe, and combined with the album's simple sounding riffs and pretty fucking awful lyrics, we end up with what might be the worst Edguy album yet. Seriously...go listen again to Vain Glory Opera or "Arrows Fly" from Theater of Salvation. Or even the re-recording of Savage Poetry. Then listen to this. What the hell happened?

On the other hand, if you still wear your acid wash ripped jeans and think Whitesnake and Great White were the best bands on Earth, this may be the first Edguy album that you actually LIKE. For myself, most of the songs here were average at best, and I'd hope for the band's sake they get over this and go back to their roots. For all I know, this could be a smashing success for the band, re-uniting the fire young girls once had for bands like Nelson and Steelheart. Ha ha ha ha hahaha hahahahahahaha. But probably not.

Apparently Tobi had these words to say about this new album: "The title just refers to the wall of sound that will bulldoze you. Let's be modest: We have ten extraordinary songs and this new album is gonna be our ticket to the hall of fame alongside with LED ZEPPELIN, BLACK SABBATH and AC/DC. There won't be a hit single this time, not even a flop single, haha; not only because most songs are too long for a single, but also because for a single we had to produce way more stuff, lose money and need a time frame to release it. The album would come later then and that would suck. For the record: Musically, we don't go back to the roots. It's not the 'Legacy of Mandrake Part 2' and it's not a little brother of 'Rocket Ride' either. It's a new album and we've set off to new horizons once more! The stuff sounds really broad, very anthemic, heavy and ballsy. We've kept our trademarks and still there are a lot of elements that are different to anything we've done before. I know what some fans may think, because if my favourite bands would have come up with statements like that I would have been scared to death, but in our case I am sure this could be the album we'll be measured by in the future."

Do they have April Fools' Day in Germany? This album couldn't 'bulldoze' a roll of toilet paper.
Verdict: Fail (4/10)