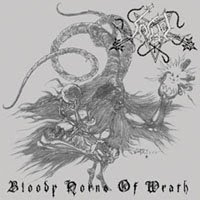 A destructive black metal demo from members of a few other unsigned Polish band, Bloody Horns of Wrath should be more than enough to get this band a deal somewhere. Their website promises 'Chaos', 'Blood' and 'Blasphemy', which they deliver.

Six tracks on the demo with a very hostile, aggressive production not uncommon to bands from this scene. The vocals of Feniks are a mix of black and a lot of death metal growling, but the music is straightforward, savage black. Lyrically the band's subject matter is evident from the very title of the demo, antichristianity with a sprinkling of sadism and Satanism.

The band definitely sounds devastating, but how are their riffs? Sadly, just average. The band is consistently fast and evil, yet the riffs are simple and repetitive progressions, the songs lack much in the way of dynamics and this made the demo dull after a few tracks. Many of the songs sound the same, with the possible exception of "Desecrated by Blasphemers" with its dark ambient intro. But if you consider this is only their first demo, then it definitely shows what the band can be capable of given some more space to breathe fire. Perhaps with a full length album they'd mix it up more.

Verdict: Indifference [5/10] (out of abject angels’ heads I will erect my throne)