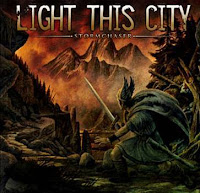 In general the prospect of American melodeath/metalcore hybrid bands terrifies me, very few of them are any good and it's often painful to hear great European bands plagiarized by shitty kids from the mall. My first few exposures to Light This City were not good, they're a female fronted outfit from California doing your typical Gothen-core melodic death. Hardly inspirational, yet I was surprised when I heard their third album Facing the Thousand. It was a marked improvement with some passion to it, a few songs got my blood flowing and fist pumping.

This is their swan song, being released posthumously (the band split up months ago), and I'll admit it's probably the same level of quality as Facing the Thousand. Passable melodic death with a few highlights, yet nothing extremely memorable. The band can play pretty well, and Laura Nichol's vocals are a little less annoying than your usual overbearing metalcore screamer. A few of the tunes get pretty intense like the fast "Fragile Heroes" and "The Collector Part 2: Donor". Then you have others which feel a little too typical. In the end I'm divided, it's not a bad album at all but I doubt I'm ever going to reach for this over any of the superior melodic death metal albums I've heard this year from Europe.

I think they had a lot more enthusiasm and talent than many of their US peers, and truth be told if they were all at the level of Light This City then a lot of the metal 'elites' wouldn't be so polarized against this subgenre. I also have always loved this band's name...imagine a straight up thrash or speed metal band with that moniker. In the end, Stormchaser is an average effort in this genre with a few spikes of excitement that can quicken the pulse, but little more.

Verdict: Indifference [6/10] (our tug of war taught me resilience and a few more things)