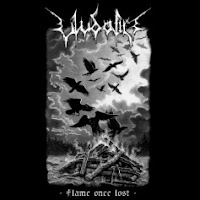 This would be the debut from this grim Russian band. Originally recorded in 2005, it is just seeing release now (they've also got a newer album en route which was recorded in 2007).

Ulvdalir has an extremely cold and distance sound. Spacious grinding black riffs haunt the edge of perception over quickly plodding bass foundation, while the drums churn out an even pace. The first track "The Black Wind" is over 11 minutes long, but the first half of the track is a bit repetitive, it gets more atmospheric and diverse later. "To the Great Eternity" is extremely raw, but creepy. "Gold of the Solitude" builds to an epic crescendo of vile, simmering riffs. "Purity to Blood!" was probably the track I enjoyed best with its mid-paced tempo. "The Cold Hall" is passable, while the last tune, the instrumental "In a Blaze of Sunset" has a slightly different sound to it, yet just as raw.

There isn't a lot of value here, though I praise the band for sticking to a terrifying, grim and evil sound that often isn't successful on this sort of album. A few of the tracks build a moderately cold atmosphere that I began to lose myself in, but most of the riffs aren't interesting enough to
capitalize on the elements of the production which attract me.

Posted by autothrall at 5:34 PM