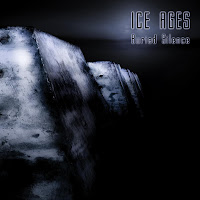 Richard Lederer’s one man project, Ice Ages, released a new album earlier this year. It’s a weird piece of music, as it relies a lot on what my mood at the moment happens to be, in order to work. Buried Silence is most effective when played as an ambient piece, and not scrutinized song by song. Indeed, comparing the individual songs leads to the eventual conclusion that a lot of the material on the album sounds very similar, with a distinct lack of highs and lows. This may make listening the album a relatively monotonous experience. Nevertheless, the industrialized, rhythmical progression of the album feels unstoppable, and doesn’t feel like the music is grinding at the same spot. There is a constant feeling of slow and purposeful movement.

I can’t recall any of the songs by name off-hand, and trying to listen to the album in any other way than as a whole didn’t seem to work for me. Credit must be given where credit is due, and Buried Silence excels at creating a palpable, oppressive atmosphere. The sound is cold, harsh, slow and purposeful as the album progresses from song to song. The distorted vocals only reinforce this, and as a whole, the music is very similar to glacial movement. The electronic elements serve to bring variation into the experience, but as a whole, their use is quite conservative.

When listening as a single experience, and when the listener’s mood is just right, the album does occasionally hit a sweet spot, resulting in a near cathartic experience. If this is the case for you, there’s hardly any reason not to own this album, if just for those few moments when Buried Silence is just right. My only complaint regarding this is how infrequently the right combination for this to happens.

The major failings of Buried Silence are its inaccessibility, as an investment of time is required to get into it, as well as its reliance on whether the listener can get to the mindset where the music works. This is not the case with everyone. In the end, if Buried Silence works for you, it works all the way. If it doesn’t, it doesn’t work at all.