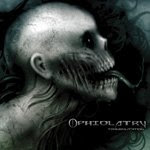 Poised to snatch the Brazilian death metal crown away from fellow brutes Krisiun and Rebaelliun, Ophiolatry release their sophomore full-length. Relentless, technical and brutal, they offer the South American equivalent to a Morbid Angel meets Deicide on crack.

Ripping guitars vomiting an unending barrage of technical death napalm, melting over the straight up gutturals of Antonio Costa and the inhuman blasting of Jorge Duarte. Though many fall on the short side, there are 16 tracks here, almost all raging Satanic whirlwinds of psychotic flailing limbs. While the band is technically impressive, they do retain an old school vibe on many of their riffs, only meted out at a sickening speed. "Neuropsychoperverse", "Nominating the Oxen", and "Abyss of Alienation" are all fine examples of brutal and technical death metal that doesn't suck. The riffs provoke terrifying atmospheres of chaos and paranoia. There are a few piano pieces dispersed about to give the listener a break in the action, but even these are unsettling.

A highly impressive album which will have fans of brutal technical USDM raving mad, but a band that remains in touch with what makes it all worthwhile, frightening acceleration and creepy riffing which will chill your spine before carving it in half. Excellence.