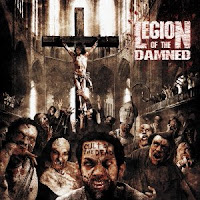 Ever the heralds of death thrashing crossover, Dutch maniacs Occult changed their name a few albums back to Legion of the Damned and continued in the same general direction. In this, they've been steadily improving, and the last effort Feel the Blade, which was really just an altered re-issue of Occult's Elegy for the Weak, was a pretty kickass reminder.

So Cult of the Dead is the true follow-up to last year's Songs of the Jackal, and another offering of groin-punching savage thrashing death in the vein of earlier Kreator and Slayer with injections of blasting mayhem. There's nothing unique about it, but you do have to take into consideration the band has been doing this for many years, they're not riding some bandwagon. There are a few songs here which are entertaining, like "Black Templar" and "Enslaver of Souls" which are a lot of fun and had me pummeling my fist and thrashing about the room. "Solar Overlord" is also pretty good with the exception of a really generic, but thankfully brief breakdown. The rest are fairly average, and often the riffs feel just too familiar to derive a decisive and fresh sense of enjoyment. I preferred Feel the Blade, for what it was.

This is one of the most pure bands of the form. You get thrash and death metal, well balanced, with a solid mix, snarling vocals and some breakdowns that might just make your knee flex out and kick someone. But I'd like to hear catchier riffs, as they have offered in the past.