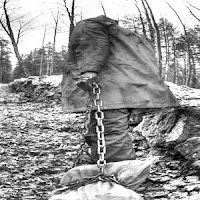 I was intrigued by the cover photo on this album, and I'm very glad I checked it out. For an unsigned band, Sweden's All Hell kicks quite a lot of ass! A fusion of hardcore, grind and pure rock and roll fury, try and envision a sound between Sick of It All and Entombed and you might arrive at this.

The album begins with the adrenaline fueled "At the End of a Rope" before lashing out with the groove and angst of "My Name is Fuck You". "Wreckage Riders" is a sick ass song Entombed would be proud of! "Through the Thickets" is slower and groovier with a stoner doom edge to it. The band picks it back up again with "When the Shit Hits the Fan" and the great "Among the Undead". Other tracks like "Necroblazter" and "Territorial Murder" really round off the experience.

The production on the album rules, it has a comparable tone to many of the bands playing Swedish old school death metal, with that unforgettable distortion. The bass is distorted perfectly and pummels along below the grinding and grooving guitars. Einar Magnusson's vocals are the perfect angry hardcore/metal tone, and the lyrics are effectively straightforward and highly pissed! Hopefully this band will get some label interest soon, it's rare enough to get a 'hardcore' band that sounds effective anymore, even one with such a huge metal influence. Fans of Swedish grind, d-beat, or even NYHC during its prime will all find something to love here.

The album is up for free on their main site, for those that care.