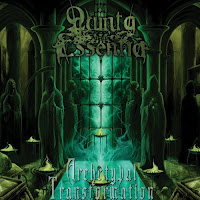 This is the sophomore album from an Alabama band who mesh melodic death and the cosmically themed black metal that might remind you of bands like Tidfall or Sirius. The mix of the album isn't quite perfect but you can at least hear everything.

The musicianship is more than adequate, in particular I enjoyed the bass of Jason Flippo (also guitars/vocals), ever playful and progressive beneath the guitars. His vocals are generally done in a black rasp but there are some doomier, groovier parts of songs ike "Forgotten but not Undreamt" which feature a cosmic clean doom style. The rhythm riffs across the album are unfortunately not so memorable, but there are some nice leads and harmonies. Across the seven tracks, there weren't any songs I truly enjoyed, but taken as a whole this isn't a bad record.

Lyrics are both cosmic and philosophical in nature, you've got your pretty Dimmu Borgir sounding three word titles like "Instinctual Human Descension" and "Arcane Stellar Firmament". That's cool though because at least some creativity was put into this aspect of the band. Now if the music could catch up and get a little catchier, we'd have a pretty promising new force in US metal.

Updated with correct bass player information on the recording.