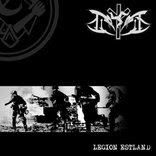 An excellent introduction to the Estonian military black metal band, this 4-track 7" was their first official release after a few demos. The style is very straight primordial black metal with a crisp production and bombastic, sweeping synths which give it all the pomp of a marching order.

The first track is "Vanade Leegionaride Laul", with an acoustic/ambient intro, setting the stage with its blazing guitars and Lembetu's signature snarling. I also loved the keyboards here, which reinforce the militant edge of their subject material. "Terasvanne" follows, an ambient/noise track filtered over an old choral recording. Creepy. "Furor Aesticus" comes at you like a Hellhammer track, with some doomy melodies and it may be the best track here. The EP closes with a cover of Tharaphita's "Demon's Night" which is a pretty cool song (I am unfamiliar with the band). Loits makes it their own here.

All in all, the EP sounds great and makes for a worthy teaser to their debut Ei Kahetse Midagi. I believe this is only available on 7" so you'll have to get the .mp3s unless you collect records and can find the limited print. They are probably my favorite Estonian black metal band and all their material is well worth tracking down.