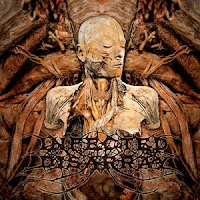 The latest onslaught to sign to Unique Leader, Infected Disarray are another in a series of super guttural, punchy chug chug brutal death metal bands. They have a sound so busy it almost comes across as messy, characterized by thick bass and insanely low register grunts, punctuated by some technical guitars. The band has members of Detrimentum and a former drummer of Gorerotted.

This is one of those bands who are enamored of the long song titles, kind of like early Carcass or Demilich. Would you believe the opening track was titled "Pre-natal Excavation of Diseased Ovarian Atrocity, Demonstrating the Necessity for Extreme Prejudicial Infanticide Within the Vomit Filled Womb"?

I didn't wind up getting into the material much. It's sufficiently brutal that I'd want to just walk up to and punch someone in the face, but lacks much in the way of distinct riffing and songwriting. Most of the tracks felt interchangeable and sloppy. Before it sounds like I am trying to totally slag the record, I'm not. There are a few moments of such swollen intensity that I found myself actually getting into it. I didn't enjoy it nearly as much as the new Deeds of Flesh or Severed Savior, but the style is comparable.

Make no mistake about it, if you like highly guttural slamming death metal with no concern for catchy riffs, but for sheer violent brutality, you'll feel right at home with Disseminating Obscenity. Buy this from Unique Leader when it drops in a few months. Otherwise, it may not be your extreme cup of tea. I should also point out this promo version of the album is missing some of the songs on its track list. So I should come across them, and they turn out better than the rest of the tracks, I will devour my own intestinal tract and update this review. How DO some of these CDs get out so early, anyway? It's gotta be the band.

Also, I think the cover art is pretty well done.