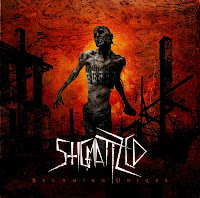 The second record from this young German death squad both obliterates their debut in quality and places them squarely on the map, a force to be reckoned with. Combining well-thought technical grooving riffs and Michael Lay's VERY John Tardy-like (Obituary) vocals, they've assembled an album here that should make many year's end death metal lists. I know it will make mine.

"Political Tactics" commences with twisting, paranoid guitar melodies before delivering a suplex of dense riffing evolved from technical thrash and exhaling progressive death metal. "Material Breach" could very well have landed on one of Death's more progressive minded records like Individual Thought Patterns or Symbolic, except Stigmatized do it more brutal. This track has an excellent flow and shift of its primary riffing. "Becoming Unique" starts at a slow, punctual gait which deepens in complexity before quickening into a technical thrash fest. "Bleeding Greed" and "Seven" are two of the other amazing tracks here.

One of the things I really love is the way they've basically channeled Death and Obituary into a more modern, progressive direction, loaded with all the right riffs and a killer production. This is one for the books, any fan of good death metal should give it a chance.