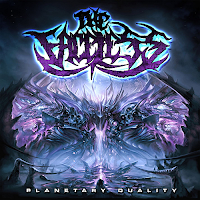 I recall regarding the band's debut Akeldama as a talented yet uninspiring debut album of brutal Californian tech death, and it seems with Planetary Duality they've topped that album with a devastating array of musicianship and an emphasis on catchier riffs which often evoke nostalgia of earlier 80s technical thrash.

Marry this with an intriguing science fiction vibe, killer cover art and you've got yet another contender for tech death metal album of the year. While I didn't enjoy it as much as the recent release from Severed Savior, it's nonetheless fascinating and just about perfect. "Prison Born" engages the listener with a battery of twisting, rapid guitar punctuation, progressive breaks, lightning leads and arpeggios, and a mix of brutal and robotic vocals. These are kept through other tracks as well, giving the record a very unified feel. "The Ancient Covenant" has an excellent off-tempo rhythm under some creepy cosmic leadwork. "Shape Shifters" is a brilliant and creepy instrumental. "Coldly Calculated Design" and "XenoChrist" return to the band's brutality. "Sons of Belial" starts slowly and features some clean vocals, which aren't quite up to snuff, though the rest of the song kicks ass. "Legions of the Serpents" is phenomenal. The album ends with the two parts of "Planetary Duality". "Hideous Revelation" is an instrumental with a frightening sample of a terrified man. "A Prophecy's Fruition" returns to that dynamic and thrilling style from the first few tracks.

It's difficult to find any fault at all with such a fantastic effort. The musicianship is insane, the mix is just right where you can hear all the pummeling. The vocals are 99.9% awesome except that one missed clean part in "Sons of Belial". And, taken as a whole, it's the album I'm going to want to sit through again and again. At this point I'll say it's the technical death metal runner up of the year (I'm still partial to Severed Savior but I will not deny the genius of this album). A major improvement for The Faceless and it should catapult them into one of the major 'faces' in the USDM scene. See what I did there? Haw haw.