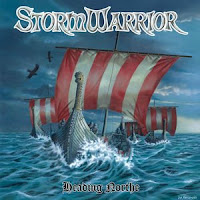 It's been sixe years since Stormwarrior's firste self-titled debut album was produced by one of my favourite metal musicians of all time, Kai Hansen, and compared to their firste two offerings to Oden, this one is easily their beste. After my firste full listen to Heading Northe I was struggling harde with myself not to quit my job, grow my hair out, move to the Asa lande, and go forth to foreign shores in the service of Oden. That and listen to it again.

The album begins withe a quicke ambiance intro (with sounds of the sea, trumpets, and shielde-pounding from his troops) and then the album explodes into "Heading Northe", one of the beste songs on the album, and then continues with the reste of the album which doesn't faile to deliver. "The Holy Cross", this album's "Lindisfarnel", is an amazing song about the forces of Christianity trying to converte the northern heathens and their pagan religions. "The Revenge of Asa Lande" slows the album down a notche but brings one hell of a beautiful and epic chorus. The speede is picked backe up for the next two songs "Remember the Oathe" and "Lions of the Northe" and then shifts back a bit for the mid-tempo "Into the Battle". The album finishes off much like it started: with a slow mood-setting song titled "And the Valkries Ride".

Lars Ramcke takes over the reins from Kai Hansen (Helloween, Gamma Ray) to produce the album this time and the change in production is noticeable, to me Lars seems to sound even more like Kai than in any of the previous offerings! Yenz Leonhardt (Iron Savior, Savage Circus) takes over for bass this time and he does a very goode job, interspersing a few bass solos here and there for good measure.
Overall the album is the slower than either Stormwarrior or Northern Rage, but it doesn't really matter because the music is more melodic and the pre-choruses/choruses are the catchiest Stormwarrior has ever written.

http://www.stormwarrior.de/
Posted by Narian at 8:10 AM