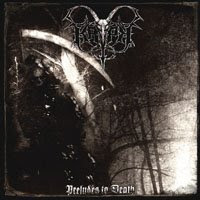 A pair of ex-Tsjuder members reunite for another truly corpse painted kick to the teeth. Though the tunes sound slightly less vicious than their previous band, they do successfully reignite the black fires of hell throughout the 9 tracks on Preludes of Death, and if this is but a prelude one can only look to the future with revulsion and frostbitten anticipation, for the evil is thriving in their simple sound.

Put bluntly, Preludes to Death is like being stalked by some psychopath through a winter northern wood and then being repeatedly beaten in the head with a fucking shovel. It's aural black murder the likes of which few bands can just haphazardly capture to disc. There is nothing pretentious, it's unalive and direct. It's not perfect and it's not really catchy, even with the stranger tracks like their namesake "Krypt" and its swerving intro riff.

The real killer here is the tone. The vocals of Nag slice through the murderous miasma of Norse fog laid out by the drumming and razor slicing guitars. These usually manifest in simpler style songs like "Misfits" or "Death" which reminded me a little of other bands like Khold or Craft. If it is more of this primal sound with good production you seek, then in a nutshell, you want Krypt. I love this album's production and it can even make the more boring tracks shine. That said, there are many other reverberations from the necrocult of late that surpass this in song quality.

If you dream in Darkthrone and Mayhem blacks and whites and like watching your own breath in the winter, then this is for you. If you own a chopping axe and like to cut wood and imagine a neck and head laying over your cutting block, then this is also for you. Black fucking metal.