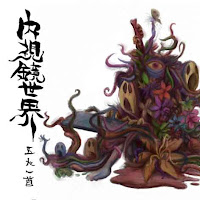 Since today marks the re-issue of this 2005 album via Season of Mist records, I figured I'd check it out, and was somewhat overwhelmed. Gonin-ish are a Japanese band performing female fronted progressive metal, most notable for Masashi Momota's sweeping pianos and Anoji's incredible voice, which can span from an ethereal range, to a more common j-pop appeal, all the way to tortured growls and snarls...

The rest of the band are no slouches. Fu-min and Oyama make for a lethal guitar/bass combination, ever engaging as they throttle their fretboards in cohesion with the piano. You will recognize drummer Junichi from legendary avant-garde metal band Sigh.

As for the album itself, it's six tracks across in just under an hour. The intro "Toyokami Kairou" is a brief 2-minute instrumental, and by the end you already know you are in for a head trip as Gonin-ish practice a more metallic sound of 70s-80s progressive rock and fusion. The guitars in "Nare no Hate" often remind me of Cynic. The wild "Shagan no Tou" is next which seems to twist through the very depths of despair. Anoji is one of those rare singers with so many tricks up her sleeve she's guaranteed to take you on an adventure. "Jinbaika" is a more mellow track where Momota's piano really shines, and the rest of the band perform a great atmosphere. "Muge no Hito" has a playful percussive edge to it, almost an ancient Japanese tribal drumming morphed into their progressive metal edge. The album closes with the epic "Akai Kioku", almost 20 minutes long which is all over the place and basically the band's answer to some of Dream Theater's longer work. Lyrics are steeped in Japanese folklore, a nice touch.

My biggest gripe with this album is the mix. It's clear and consistent enough to hear everything, but it really doesn't make the album shine as much as it should. These musicians are obviously quite brilliant, but little things like the guitar could have a beefier tone, some of the synths are a little out of balance, etc. The album feels more like a 70s production but it could be far more effective with a more potent mix.

Anyways, the music here is quite good, and the band will appeal to fans of all manner of prog rock and progressive manner, as well as theatrical Japanese metal like Onmyo-za. I highly recommend checking this out if you are interested in something different, yet familiar, with top notch musicians and a charismatic frontwoman. Now that this is coming through Season of Mist, the band should see a lot of exposure.