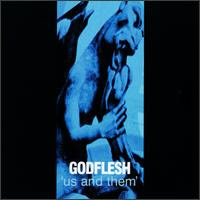 So this was the album with which Godflesh decided to go jungle. Breakbeats and slower hip hop drum programming dominate the tracks, but if this sounds like some kind of nightmare for the Godflesh junkie, it's actually not.

It works rather well! Especially on the faster, dance tracks like "I, Me, Mine" with its wailing, creepy guitars over driving jungle rhythms. "Endgames" is another cool track with its distorted bass, big beats and repetitive, creepy funk riff. The band does still stick to its roots with a few of the tracks. "Witchhunt" sounds like an older tune. "The Internal" sounds like a prequel to Broadrick's newer band Jesu. Some of the other winners here are "Control Freak" with that sick bass. "Nail" which almost sounds like a porno-Godflesh syphoning NIN. The lyrics are quite dull across the tracks, but despite their insightful nature as a band, have their lyrics ever been naught but repetitious, simple lines which would take a mere few seconds to compose?

It's one of their most unique creations amidst a large field of unique creations. While it may appear that Godflesh was trying to 'keep with the times' by using the popular beats and electronic appeal, they actually work well with the dense vocals and droning guitars which made this band the legend it is today.