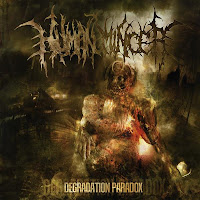 Album number three for the Spanish brutes, and while I was expecting more of that middle of the road, throwaway guttural death I was pleasantly surprised by the whirlwind of razor edged chaos that was Degradation Paradox. Though the band has its fair share of chug and blast alteration, it also has a refined sense of the old school and a torrid of intensity to the songwriting which easily maintained my attention throughout the eight tracks.

"Flask Copper Deglutition" evokes the first holocaust with savage blasting accented by some Morbid Angel style crunch and squeal under a flurry of brutal grunts and snarls, which sound pretty fucking amazing in the crisp mix of the album. "Sculpturing Himself Atrocity" has some sick spurts of intense chugging with evil riffing to cap them off. The title track hit me like an 18-wheeler full of ballast-toting zombies. "Dyskinetic Martyr Modification" (what a name) just flat out leveled my brain, and then the album just continues to get even more intense and complicated as on "Scaphocephaly Status Error" and "Macromutation Overflowed".

Did I mention I love how they name their songs? Truth be told, there aren't a lot of extremely catchy riffs to be found on the album, yet it doesn't even NEED them, because it's such an intense ride that will have you banging your head for the very short time it takes until your neck snaps and you don't have to worry about catchy riffs anymore.