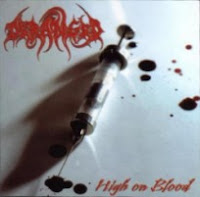 Though they split up early this year, Deranged has left us quite a legacy of brutal Swedish death metal with that insane, ripping guitar tone. High on Blood is their 2nd album, some consider it their best. Though I prefer their 5th album Plainfield Cemetery, it's difficult to deny the incredible onslaught here.

"Razor Divine" generates threat with its relentless battery, incorporating that incredible Swedish tone with the brutality of the USDM scene, lots of chugs and squeals that never become dull as the band continues to rip forward with charge riff after charge riff. There is no letting up into "Humanity Feeds on Filth", and there are a host of other great brutal numbers like "Robber of Life" and "With the Silence Came Horror". The album is quite consistent across 11 tracks, but it should be important to note that this isn't so much a band that gets by on catchy melodies like other Swedish bands. The focus here is the brutality and velocity with which each track carves through the listener's flesh.

A murderous affair indeed, an example of one of those great 90s European death metal efforts that is sadly overlooked in such a densely crowded genre. If you enjoy Swedish death metal with a US influence, listen no further.

Yeah, Plainfield Cemetery is all you really need, but their discog is good fun. Hopefully the guitarist and drummer pick up something new to work on - a change of style could do them good.