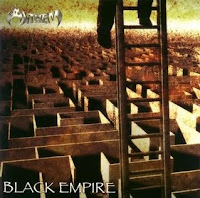 Anthem have long been one of my favorite Japanese metal bands, throughout the 80s, 90s and 21st century. Their penchant for composing simple, by the book melodic metal with catchy vocal lines (in both Japanese and English) has produced nary a weak moment in their career. They've always been better than Loudness (the two bands have shared members) and other bands that have seen more spotlight, and it's a shame. This new album, Black Empire, their 13th full-length, is ample evidence why.

Let's start with the cover art...just how pensive is that image? Yet it makes perfect sense to me. On to the production...never has an Anthem album sounded this good. Granted, they've never NEEDED to sound this good because the music is generally such high quality (but I can think of at least a few albums where the vocals were too loud and the mix was way off). But here you get an exemplary balance where all the instruments can shine, including the use of synths on many of the tracks. Every lick of just about every solo on the album is perfectly placed to provide an adventure within the track...yeah, the way solos SHOULD always be played on this type of album.

The title track kicks off the album with mid-paced Judas Priest style guitars layered in Eizo Sakamoto's unmistakable vocal presence. The chorus is catchy and highlighted by the light keyboard flourishes. This is prime 80s radio ready power metal here, make no mistake. It's catchy and quite accessible. "Heat of the Night" starts a little faster, with a definite German speed/power metal vibe under some shrill guitar wailing. It is clear at this point that Anthem intends to really kick our asses on this album. I couldn't be happier. Another great chorus with good off-vocals. "You" is a rock and roller through and through, with the roots Priest/Sabbath influence to its riffing and the erupting melodic chorus. "Go Insane" is hyper and melodic and once again lays a smacking down. Again, Akio Shimizu's guitar wails add a layered haunting to the bridge riff. "Walk Through the Night" is an extremely cheesy radio ballad with female guest vocals, it's straight out of like 1984 or something but I love it. "Emptiness World" is back to rocking. "Telling You" is anothers highly 80s rocker which reminds me of Def Leppard, King Diamond and Saxon from that period. "Pilgrim" is an epic instrumental, slower-paced tune with beautiful neo-classical guitar melodies and some wonderful shredding. "Awake" is another melodic, anthemic metal number and the album closer "Perfect Crawler" is once again back to the Priest way of doing things. I have no problem with this since Priest themselves seem incapable of doing it anymore.

The bottom line, this is a fantastic new album from Anthem and I am thrilled to see them releasing such superb material so deep into their career. I will be listening to this for some time and in addition it's likely to make me break out their discography yet again. One of the world's premiere melodic heavy metal bands even if they've never had an inkling of the respect they deserve. This is more likely to appeal to classics 80s metalheads and j-rockers than to the Dragonforce/Rhapsody sect of Johnny-come-lately ADD-induced symphonic shred power metal fans, but who cares. It rocks like there is no tomorrow, and that is all I want to hear when see the Anthem logo.