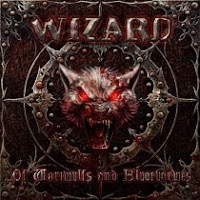 It's pretty rare that a power metal band in today's climate can tackle the supernatural antiquity of werewolves, witches, and blood sucking things of the night appropriately. Powerwolf seems to do a good job in this terrain, but perhaps its their excess use of organs and tongue in cheek lyrics that win out. Other stabs, like Iced Earth's Horror Show, were average at best, and now Germans Wizard have decided to deviate from their usual Norse Myth 101 ramblings to capture the subject, basing their lyrics on a historical horror trilogy of novels by the author André Wiesler called Die Chroniken des Hagen von Stein. This is a curious choice, as the books are only a few years old, and most fantasy metal bands focus on surefire classics, but hey, why the hell not? After all, werewolves, witches and such are quite the trend in all media these days.

...Of Wariwulfs And Bluotvarwes is certainly the most colorful title the band have chosen for an album to date, leaving behind such minimal, lacking fare as Odin, Thor and Battle of Metal. While I'm not inherently opposed to a power metal band veering towards darker subjects (Grave Digger is one obvious example, but there are others), I am not sure that the bright polish of Wizard's songwriting is always best affixed to the gloom of the source material. That said, this album rocks far more often than it doesn't, channeling the band's massive Manowar influence into a landscape of melodic European power anthems that are like to please fans of bands like Primal Fear, U.D.O., early Edguy and the aforementioned Grave Digger. Little to no nuance is involved here, and many of the riffs will seem derived and familiar to anyone that has followed the genre in the past 15-20 years. "Hagr" feels as if it were straight from the book of Judas Priest-isms sharpened by Primal Fear. The title track is essentially late 80s or 90s Manowar, both the opening guitar riffs and Sven D'Anna's vocal performance. Quite a few of the songs also have that grimy Kris Boltendahl pitch to them (like "Taste of Fear", "Blotvarwes" and parts of "Heart Eater").

It's not an impressively dark record by any means, but it's efficient, and I can't think of a single song that withdrew me from the headbanging hypnosis of the simple rhythms and attempts at memorable chorus parts in "Hagr", "Sign of the Cross" and even "Fair Maiden Mine", with its slightly lusher prog/power overtones. The production is pristine and glossy, they've had about 15 years or more to work through this, so it's as clear and professional as most you've heard of late in the higher tier of the Euro throng. D'Anna might lack the silky tones of an Andi Deris or the screaming range of a Henning Basse, but he works well enough with the pipes he was given, and the band never devolves into glorified self-indulgence. Granted, some might not take to the particular theme Wizard are exploring here, but its not at all a bad thing to hear them branch out beyond their Viking lore obsessions. ...Of Wariwulfs And Bluotvarwes isn't about to spin heads out of their sockets, but it's solid and entertaining for the craft, and unlikely to face charges of heresy.