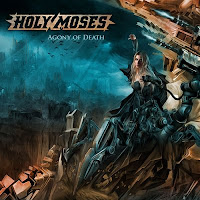 Agony of Death introduces a few new elements into the Holy Moses formula that create quite a fascinating contrast to the harsh, straight modern thrash of the previous two albums. Most prominent of these are the futuristic synthesizer intros and outros used throughout the album, courtesy of Ferdy Doernburg (Axel Rudi Pell, etc), which give it an atmosphere you would never have discovered on the older records. It's almost like the album were going for a Blade Runner or Mass Effect type blend of future thrash, which frankly is a delicious idea, but mostly executed here through Ferdy's contributions and the psychological lyrical explorations of social castigation and other problems at large. There are also some nice leads, mixed a little low against the rhythm guitars but feeling flush and atmospheric, and a number of other guest contributions that lend the album some needed character.

I say that, because at the core of this is a fairly average propulsion of hammering thrash that doesn't stand out from prior efforts. The guitars manage to maintain a strident velocity through most of the songs, like "Alienation", "Pseudohalluzation" and "The Cave (Paramnesia)", but the actual riffs themselves are fairly common for the Holy Moses catalog. Thankfully the 'whole package' here works out in the band's favor. Henning Basse of Metalium loans some backing vocals to the track "Schizophrenia", lending it a pretty epic power/thrash feel and nicely grinding against Sabina's blunt and rasped delivery. "Angels in War" has a rousing backing vocal section and a guest solo lick from Obituary's Trevor Peres. "The Cave (Paramnesia)" has some brutal backing vocals courtesy of Schmier, and the closing ambient sequence is quite wonderful, serving to wrap up the dystopian package hinted at by the mecha-Sabina cover art against the wasted urban backdrop.

I only wish that Classen's vocals and the guitars were a little better throughout. Both will be familiar to anyone who has experienced the band's catalog, but they just don't sound all that thrilled to be here among this decaying landscape of ideas. They're not exactly boring, but if you took them out of their environment they'd feel like a pretty throwaway collection of compositions that don't in any way distinguish themselves from the crowd. The tone is a bit crisp, which feels digitized in the wrong direction against the leads, intros and vocals, and thus the production does come across a little dry. It's a shame, because I truly buy the idea of a cyberpunk-style thrash record, and other bands that have explored dark futurism (like Paradox) have done quite well with it. In the end, Agony of Death is another decent Holy Moses effort, but no better or worse than the last, and void of its clever seasonings it would fall well behind the rest of their 21st century offerings.

Verdict: Win [7/10] (separation of things that belong together)