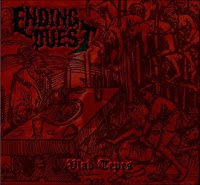 Ending Quest originated as a group of friends fucking around with the HM-2 guitar tone and attempting some impressions of their favorite cult Swedish death metal acts. This inevitably led to some creativity, and the band started composing originals. Last year, they released a demo titled Led to the Slaughter, which was decent, and now they've followed it up with Vlad Tepes, a more substantial experience (10 minutes longer), but ultimately about not a far cry from the quality of its predecessor. Predictable but efficient d-beat beats are used to back vicious riffs born of the early 90s, and no one could argue that they do a passable job of summoning up nostalgia for their obvious inspirations: Entombed, Dismember, Grave, and perhaps a little Gorement (from whom they derived the band name).

"End This Mortal World" opens with dire melodies ala Left Hand Path, but the transitional stops and starts didn't do a hell of a lot for me, even if the riffs were fully functional. "Vlad Tepes" uses a charge-like motif before it swerves towards a vampire-like, stalking pace, but this is also not a favorite of mine on the demo. "Butcherknife Encounter" turns up the frenzy, but I didn't exactly love the riffs. I found the last two originals "Coffin Worm" and "Dark Immersion" to be the best of the originals; the former with some simple but effective, crawling and crushing rhythms; the latter a more grinding beast with a dash of old Repulsion and Napalm Death in the verses and a nice, gloomy melodic breakdown bridge. On the prior demo, the band offered a rendition of "Wolverine Blues", which seems an obvious choice considering their style. Here, they tackle "Scream Bloody Gore" (Death) and "Born for Burning" (Bathory), both of which are morphed into their own image and not played too close to the hilt.

In the end, I actually wasn't as content with the material here as the first demo ("Led to the Slaughter" and "A Fiery Fate" come to mind); but it's close; and certainly these youngsters remain competent, authentic and enthusiastic about the style. The real issue, as it is with so many of these sorts of bands, is whether they can make a strong enough impression in the existing envelope of the genre that the audience listens beyond the mere familiarity and once again experiences ye old rapture of classic Swedish death. Whereas veteran derivatives like Repugnant, Bastard Priest, Tormented and Tribulation excel at nearly matching stride with their influences, Ending Quest just sort of make due, well versed, with decent lyrics, but not incredibly catchy songs.