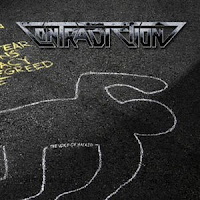 Contradiction had already been around for about 14 years when The Voice of Hatred was released, but they were not sitting about idly. They released a few full-lengths and demos, none of which I can admit to having heard, but I'm guessing did not win them a large ration of success, especially considering the long, deep slumber the genre had taken in the 90s. This 4th album saw the band signed through Armageddon Music, along with fresh German blood like Spellbound and Reckless Tide, and a few veterans like Holy Moses; and they were finally able to give their aggression a proper voice, even if its one that does fade into the chorus of similar-minded artists.

The chalk-line and pavement poetry of the cover seems to hint at an urban brand of thrash, but there's nothing ghetto about the sound here. At its best, this is blazing, riff-heavy thrash metal with only slight tints of technicality, a hybrid of Bay Area and German aesthetics that sits soundly below the meaty, aggressive vocal tone of Oliver Lux. The band knows how to develop a chorus with a small fraction of melody ("The Voice of Hatred"), they construct their leads and guitars well enough, and I'm most reminded of bands like Exodus, Heathen, Vio-Lence and Forbidden, though the vocals are different. They can pace themselves between the expected momentum of mid to faster paced, biting thrash ("Break the Oath", "Engines of Greed", "Horizon"), but a few of the songs have great melodic setups like "Arguments" and "Nation of Fear" that work rather well.

Unfortunately, there are a few slower groove-heavy songs like "Crimes", "Privacy" and "Falling Down" that aren't so appealing, and they do hold back the album's overall effectiveness, but even these are written with a superior style to them than other German groove metal acts like, say, Hate Squad. Had The Voice of Hatred been trimmed down to about 6-7 songs, excluding the groove metal, then it would have made for a fluid, worthwhile listen, but it can be a little trying to skip around the track list, and even the pure thrashing moments do not elevate the band to the level of their forebears (European or American). On the bright side, this is a band on the rise, and future installments will improve their formula.