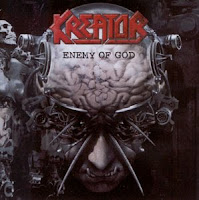 Long have I debated to myself which of the 'Big Three' German thrash bands, at least in the currently adopted trinity (I would personally replace Sodom with Tankard, but the masses would not seem to agree), is the most deserving of the mythological crown. All of them had faltered to an extent in the 90s, Sodom the least, but if I'm to take into account the overall quality of their studio efforts, from the 80s rise to prominence through the 21st century revival, then the answer can only be: Kreator. Enemy of God, their 11th album, sees not only a band return to the form previously established in the prime of their existence, but instantly supplant any doubts on their sincerity with combat boots to the neck.

This is, in essence, what a thrash album is all about. Anger. Relevance. Social awareness. And most importantly, a crop of bloody songs that you can remember long after first hearing them, and that you can always turn towards when in dire need of a rush or adrenaline or just good sense. Enemy of God is all these things, and while it might not cross the threshold set by their masterworks Coma of Souls, Terrible Certainty, and Pleasure to Kill many years before, it absolutely dwindles there, hangs out for an ice cream and makes its presence known. But Mille Petrozza and his squad mates have not simply repeated themselves, for this album is basked in a deeper, violent, modern tonality that is mildly less technically inclined than the riffing of Coma of Souls, but produces the same barking holocaust. Sami Yli-Sirniö has by this point become fully integrated with the band, and what they produce is dominance of the sort that the last album Violent Revolution, wildly hailed as their 'comeback', could only dream of.

It always helps, of course, when you put GOOD songs at the beginning of your album, a practice that many bands in numerous metal genres seem to forget, and Kreator has certainly done so here, placing two of the very best up front. The rampant "Enemy of God" itself provides nearly 6 minutes of belief smashing intensity, with a chorus that, while predictable, cannot fail. How many true metalheads don't want to shake their spiked fist at the empty sky and decry the divine, howling "Enemy of God" when they look upon the fallacy of the flawed creation upon which they stand? Add to this great solos, great lyrics and a mechanistic, punishing breakdown and try to sit still. Then we're treated to the "Terror Zone"-like intro and percussion of "Impossible Brutality", another instant classic due to the swaggering power of the verse guitars and another easy to guess but perfectly executed chorus.

That's the best one-two knockout punch since The Antichrist, but Kreator are not content to just shit out two hits and run with them. The rest of the album is just about, if not as good as its opening numbers. Highlights include the surgical smiting of "Suicide Terrorist", nihilistic drag strip of "World Anarchy" and the desperate melodic rush of "Murder Fantasies" and "One Evil Comes - A Million Follow", but there is also no denying the force of "Under a Total Blackened Sky" or the sorrow-charged glaze of "The Ancient Plague". In fact, probably the one track I don't love is "Dying Race Apocalypse", which has a heavy dose of melodic death influence similar to some of the tracks on Violent Revolution, but it's still potent enough Kreator and doesn't interrupt the flow of the album (and has a pretty thrifty melody in the bridge).

It's simply another superb album, and while it initially gave me the impression it would wear off, I still find the time to listen to it with nearly as regular a rotation as the 80s classics (along with Hordes of Chaos, which is even more mind blowing for so late in their career). That these Germans have weathered the lashings of time and change so mercilessly is a wonder, and while they might have stumble through their second decade, Enemy of God is proof of their dominance, never pandering to negligent trends, never insulting the listener's intelligence, and storming with the menace that this genre deserves.