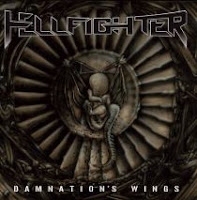 An examination of Hellfighter's lineup reveals it to consist of 80% former Xentrix members, including drummer Dennis Gasser, axe slinger Kristian Havard, and vocalist Simon Gordon, whose presence on that act's unfortunate, crippled swansong Scourge (1996) was less than encouraging. However, it turns out Gordon gets a last laugh in this new incarnation, because rather than just reignite that band like every other now obscure thrash act is doing, they've wisely decided to channel their musical evolution into a new entity. Hellfighter are not as directly thrash as Xentrix, but the bricks of the foundation are still present, here imbued within an envelope of traditional power and heavy metal with thundering drums and thick chugged rhythms.

Gordon works out well here, his voice more of a workmanlike beast than before, and the lyrics not involving any of the unfortunate accidents found upon Scourge. He can scream with the pitch of a siren, and does so fluently, but the majority of the lines are delivered with strafing, mid range aggression. The guitars are driving here, and the rhythm section rock tight (Dennis reunited with Mel Gasser, Xentrix bassist in their early years). I'd hardly call Hellfighter a storm of riffing, most of the structure serves as a solid support for the vocal thrust, power thrash combo with a bit of 90s induced grooves not unlike the later Xentrix albums. However, tracks like "A Lesser God", "Damnation's Wings" and "Faith in Lies" exhibit that this British band is well aware of how to compose a verse and chorus procession. "Descent" goes on further, with a more clinical guitar sequence that brings to mind For Whose Advantange? and I was thankful for that; plus the longer tracks "Bring Only Pain" and "Firewalker" well manage their periods of calm and violent escalation.

It becomes a little harder to place Hellfighter into the current metal spectrum, since a large number of the old Xentrix fans are probably not always keen on the more traditional power inclinations, and vice versa. However, I'd say that those who enjoy the modern chugging of a band like Evergrey or Nevermore, or perhaps the darker albums from Nocturnal Rites, might want to give this a try. The production is flush with the times, loud and crushing where applicable, graceful elsewhere, but always honest. There is certainly enough of their former selves, combining the Metallica-like 80s ingredients with their less appealing 90s components, to draw back those curious to whether or not they've still 'got it', and while I won't praise the album to the same extent that I might have once serviced Shattered Existence or For Whose Advantage?, it was not at all unpleasant to experience. For what it is, Damnation's Wings succeeds, with some room for further growth that veterans like these should have little difficulty filling.