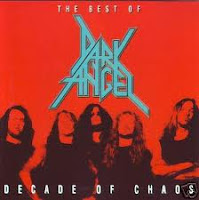 Those of you who are familiar with the Relativity acquisition of the Combat Records roster will likely groan at the remembrance of 1992, in which the foster label decided to make a massive cash grab with a number of worthless compilation albums. You might recall Death's Fate (spoor), Forbidden's Point of No Return (dung) and Exodus' Lessions in Violence (excrement) as prominent examples, but the California menace Dark Angel was not exempt from this practice, and thus we are left besmirched and disgruntled by a Decade of Chaos, an album headed directly to the bargain bins, the recycling plants, and the collections of unsuspecting do gooders who thought they were doing the thrashers a favor, but would have been better off buying them a pack of smokes or a beer.

One wonders how a band like Dark Angel, great but hardly popular in the mainstream, really even warrants a 'best of' album. This is not fucking pop music, where soulless record industry czars constantly refurbish studio recordings to turn a buck or two and fill out or pad recording contracts with famous radio friendlies. But Decade of Chaos proves that the cash grab was on multiple levels, and that even our beloved thrash bands were fair game when the snake oil salesmen arriveth on our doorstep. The ten tracks here are all lifted from the band's Combat Records releases. "Darkness Descends", "Merciless Death", "The Burning of Sodom" and "Death is Certain (Life is Not)" are snatched from Darkness Descends (1986); "Never to Rise Again", "The Promise of Agony" and "Leave Scars" from Leave Scars (1989); and "Act of Contrition" and "Pain's Invention, Madness" borrowed from Time Does Not Heal (1991), to which the paint had not yet dried, coming out only a year prior...

This is rounded off with "We Have Arrived", not the studio version, but the live offering from the Live Scars EP (Combat didn't own the rights to the debut album, evidently), then packaged and printed with gaudy, awful cover tones of red background and light blue logo. What a fucking eyesore that is! As far as track selection, this really isn't all that bad, they're all good choices, but it doesn't change the fact that Decade of Chaos is completely, 100% void of merit. Landfill. Not suitable to set your beer upon. Even a cheap beer. Any amount of money spent on this ripoff is simply better exhausted elsewhere. A handshake and hug from a prostitute. A half dozen packs of gum. Fuck, instead of paying Relativity for this fodder, just write out a check to Jim Durkin, Ron Rinehart or any of the band members. Or send cash. I'm sure they'd appreciate it more than knowing you bought this travesty.