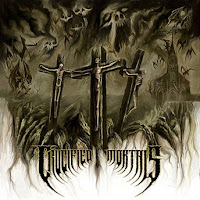 I remember hearing these gentlemen back when they put out their Converted by Decapitation EP in 2004. At the time, I was playing a straight up old school thrash/death metal band and we had been hunting down similar artists. The drummer encountered Crucified Mortals, a band featuring some current and former Nunslaughter folks. What I heard then wasn't so bad, and having now listened through their debut, s/t full-length, I come off with the same general impression: well-written, energetic thrash in the vein of Razor, Sodom, Slayer and Kreator, with vocals that remind me of a mix between Tom Araya and King Fowley. This is definitely a pretty authentic record, minus all the fashion-thrashin' bullshit, with a serious take on the style that does not belay the intelligence.

It also opens with a bang, through the horror-like intro sequence "The Seance", creepy melodies winding down into the explosive burst of "Sordid Treachery". Piledriver guitar rhythms that make me reminisce for Dave Carlo's playing on Razor's Violent Restitution, thicker in tone if a little less potent and memorable. However, they're amazingly consistent, so you can count on breaking your neck for about 37 minutes of generally faster paced assault like "Resurrected Fiend", "Ghastly Affliction", "Desecrating the Dead" and "Figure in Black". They rarely fall off course, and even when they do you get the ominous bass intro of "Perpetrator" or the more glorious tank treading that inaugurates the closer "Doom". Expect a lot of tight, sinister patterns being thrust at you many miles per hour, and some descending, evil riffs similar to Slayer in their 80s prime.

I will admit that I don't particularly love the vocals of Reaper Horval, but I doubt they'll dissuade anyone who fancies the meatier thrash frontmen of Rigor Mortis, Deceased, Gammacide or Demolition Hammer, and they certainly fit over the ensuing mayhem. Few of the songs here really stand out in the long run, but they're definitely entertaining while they last, and credit should be given that Crucified Mortals entirely avoids the self-referential pageantry that has plagued new thrash acts throughout the 21st century. These men obviously care about the real deal, listen to all the right influences, and their output is indisputably sincere. In fact, I'd say I enjoy this more than a number of Nunslaughter releases, and certainly more than a lot of the less interesting US thrash retroverts like Warbringer or Lich King, but it doesn't hit all the right notes for cult status.