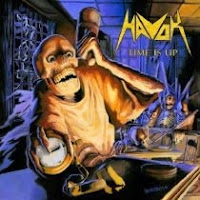 Havok is not the sort of band that epitomizes any revolution or renovation of classic 80s thrash ideals, but they celebrate the genre without the fashionable pomp and circumstance, and I'm sure I'm not the only person who finds this a relief. The Coloradans are also very well versed in two of the fundamental tenets that have been present in most impressive thrash metal works of the past 30 years: 1) the riffs must, by all means, propel the listener into a hair whipping frenzy (in my case, skull whipping, as the pleasures of copious scalp protein fled my person many years ago), and 2) the vocals need to sound fucking pissed! Yes, Time is Up understands such concepts with punishing youthful clarity, and they're a huge reason why this sophomore album not only trumps the debut, but most of the other American retro thrash along with it.

Two icons. Two words that get the spine shivering and the blood stirred. One is Exodus. The other is Destruction. Havok fall directly between these two poles, invoking the viral speed and street warfare of the former in their legendary 80s works Bonded by Blood and Pleasures of the Flesh; while also channeling the strong structure and clinical evisceration of the latter. Vocally, David Sanchez straddles the line between Paul Baloff and Schmier, with a dash of Atrophy's Brian Zimmerman for good measure, and an angry, punctual percussion is thus created atop the onslaught of quality riffing and heart stopping rhythm section. The band is not opposed to some variation, as long as the central thrust remains intact: a good example of this being "D.O.A.", which streamlines some fresh, melodic/death metal guitars into the intro, and then becomes so propulsive during the bridge that it hinges on old school death. They also season in a few pure, unadulterated crossover/punk riffs (like the chorus to the opener "Prepare for Attack"), gang shouts in full effect.

But the larger fraction of the material is just true, barnstormer thrash that will tear you the fuck out of your seat: "Fatal Intervention", "No Amnesty", "Covering Fire", "Out of My Way" and the slower "Killing Tendencies" all hit the spot, but nothing is necessarily filler. Each is adorned with at least 1-2 guitar riffs that remind us of everything we love in this genre: the excitement, the surprises, the brash prophesies of our material and social flaws, the authenticity. Sure, Havok might be seen to be as derivative as the next lot, but they're not exactly assailing the laws of gravity or atomic physics here. They are creating a blood rush to the head, honoring the sounds pioneered by their forebears, and having fun in the process, just like you will be, when you go out and buy this record. They have outdone themselves, making short work of the 2009 debut Burn. It's not perfect, but along with Bonded By Blood's latest Exiled to Earth, this is easily one of the brighter flames to ignite under US thrash in years.