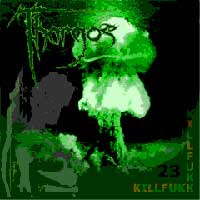 Killfukk doesn't look like much, and in fact I think it must have one of the ugliest cover arts I've ever seen, but if it's ugliness was meant to help categorize the music, than I think its nuclear facade is only too appropriate. Thargos are another band that follow in the retro thrashing footsteps of the German legends, but while you can most assuredly hear the Sodom and Destruction influence here, I was most impressed that the band were able to capture the unflinching propulsion of Tankard's first three albums, especially in the vocals which sound like a sadistic younger cousin to Gerre, and the steady lightning step of the drumming and crisp riffing patterns.

These Germans do one and only one thing right, just well enough to brand themselves to your memory, and that's by conjuring up fervent storms of thrash so fast that your head would spin off your neck if you tried to visually follow what they were doing. Seriously, the band's joints must have been aching after their rehearsal sessions for this, cuts like "Those I Killed" and "Natural Selection" whipping by with no concern for the speed limit. The guitars are violent and explosive, but also tautly wrought over the tinny drum-storms, and vocalist 'Frontgoat' does a good job in making his vocals atmospheric through reverb and effects, giving this whole album a bizarre, futuristic cold war appeal despite The Morning After-like riffs (albeit with a cleaner production than Tankard had in the 80s). It's crazy fun, though I'd disagree with the notion of "Godz of Black Metal" that this band is really related to that genre, despite the blasting of "Release Him from Earth".

Killfukk holds up for almost 40 minutes, with highlights coming in the brightly rained pain of "Fukking the Hellfukked", the screaming "Subhuman God" or the atmospheric punk charge of "The Antisinner" which is so old school Tankard that I nearly lost a year off my life when hearing it. A few of the songs are less consistent, namely "Black Mass" or the entertainingly titled "Anti Trend Super Mega Blasphemy Song", but they still flow well with their surroundings. The cover of Exodus' "Bonded By Blood" also fits into their modus operandi, and they do a loving, tidy job of it here. A decent hidden bonus closes out the debut which recalls the late 80s period of Destruction, and by this point the listener feels as if he'd been laying on a speedway, now covered in spent fuel and tire treads. I'm not about to give Thargos the highest acclaim for this (I prefer their next album Salem City in quality), but it's certainly likely to appeal to fans of high paced thrash from both sides of the pond: everything I've named dropped earlier, and also the Japanese band Fastkill, or perhaps even Municipal Waste.