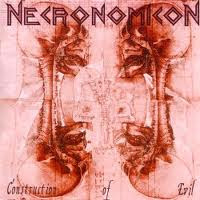 With the major Teutonic thrash titans back in full swing, reaping audiences both new and old through solid touring and releases, it was only a matter of time before those bands that once stood in their shadows would also bleed forward into a new era. Necronomicon was perhaps sometimes known as a 'poor man's Destruction', but they had their moments, most notably 1988's Escalation. After that, they took a few long naps in between releases, with one arriving in the 90s (Screams) and then, a decade beyond that, they reignited the fires of inspiration yet again to produce Construction of Evil, with most of the lineup of the prior decade still intact and a fresh studio sound that easily dominates their backlog.

There are still comparisons to be made to that other German band, especially as Volker's vocals still persist in their painful pinch ala Schmier, but the riffs seem to have come into a life of their own. Much of Construction of Evil has a tight, consistent flow to it, a steady menstruation of violence, fun tracks like "Stormbringer", "Paralizer", "Bone Daddy" and "Hard Pain" loaded with well meaning guitars, flighty leads and bitter, biting vocals. In fact, I feel safe in stating that this was Volker's best personal performance, he's great at those little screams courtesy of 80s Destruction, and he sounds admirably ruthless throughout. But despite the competent appeal to genre hounds, there's just not much of an impact to the album in the long run. There are a number of slight missteps like the awkward intro to "Fireball", the oddly rocking "Alight" or the more mediocre tracks like "Terrorist Attack" or "Insanity" which are too easily skipped.

Naturally, the mix here is far superior to what they've done before, from a technical standpoint. The instruments are very well balanced, the vocals at the forefront without robbing the guitars of their power, but in a way, I'm not sure this cleanliness becomes Necronomicon. Though their earlier songwriting was disjointed and often sloppy, there was a particular charm to their lo fidelity atmosphere that created a cult appeal when listening, even if the compositional level left much to desire. Here, they've cleaned up, but just become another standard sounding band that follows in the footstep of the obvious. Construction of Evil is not nearly at the level of Enemy of God, The Antichrist, or Sodom's s/t, so they don't generate all that much excitement, even if the vocals are pretty slick. But at least the band had become more seriously inclined, and we wouldn't need another decade to wait for their next offering.