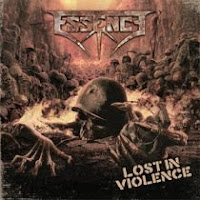 I'm not going to lie that when gave a first pass through Lost in Violence, I felt some rare stirrings of Artillery (1990 and beyond). Not only is this young act from Denmark, but they open with a decidedly exotic, Eastern intro (ala "Khomaniac" from By Inheritance) and utilize a lot more melody in their compositions than most of the 21st century thrash acts. When it comes the riffing structure, there is obviously nowhere near the same level of complexity as their countrymen, sort of a mix of Terror Squad era with some Bay Area punch and the occasional S.O.D. brick house breakdown. But the leads here are incredibly well plotted, and Essence have something even more important going for them: they don't treat thrash metal like it's some pageantry for poseurs. There's a healthy respect for the genre they perform, and it translates to the energy and quality of the final product.

Essence also makes pretty good use of an aggressive, biting vocal style that falls somewhere between that of classic Exodus and the Swedish black/thrash band Raise Hell. There's a lot of edge and character to it, though I'm not sure that it's being used to its maximum potential yet. Tracks like "Unlimited Chaos" and "Blood Culture" crush along with mid-paced, bouncing force that is suited not only for the straining of the neck, but carries a slight edge of angry East Coast US hardcore which should have all manner of fists and knees flying about into the flesh of any nearby unfortunates. Fortunately, this does not manifest into the shitty breakdowns one might expect, but some solid riffs that, if not exactly exhilarating, get the job done. But I actually prefer it when the band picks up speed, like the bridge of "Blood Culture"; the melodic, driving overture "Trace of Terror" or the thundering "Night's Destruction" which its great descending early lead and a touch of wah-wah that reminded me of some of the tunes from Artillery's B.A.C.K.

Lost in Violence is not about to change the world, but it's a solid debut full-length. If it has any problems, its that the chorus segments are not immensely entertaining, and you always get the feeling that you'd like to hear them propel along much faster than they do here. They are not inept at formulating their guitar riffs, and usually each song has 1-2 catchy bits, but it seems content to merely hover at the edge of inspiration. The production is decent, with a lot of crunch to the guitars and some bitter emotion delivered through the proximity of the vocals, and the leads given just enough gleam to endorse their quality. Essence is not incredibly impressive, but neither are they a joke. Just a good, honest fit for the style, and considering how much time they've got before them, who knows what they might accomplish down the stretch?