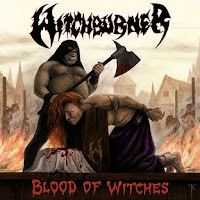 The worst thing in writing a review for an album like Blood of Witches is that I feel like I just wrote it for the previous album by Witchburner: Final Detonation. I could probably cut and paste most of that and just repeat myself, but in the interest of fairness and completeness, I shall not. Blood of Witches carries the same general tone, same quality of the riffing and absolutely no deviation from the band's morning dose of coffee, cigarettes, Sodom, Kreator, Slayer and Destruction, so if you're not feeling that impulse towards blackened thrash metal, then seek your thrills elsewhere. This is a band obsessed with their spikes, leather, and occult metal classicism, and that's unlikely to change until the day they depart us.

Witchburner can play their instruments and they've got a good, solid tone going for this style, though it's presence might lack some of the more viral, rugged charm of the 80s icons it does its best to emulate. They are fast, and they are amused, and there are honestly a handful of cuts here that rather do make my own cut. "Dirty City" transforms from a pretty stock mid pace to a frantic bridge, and I enjoyed the lead sequence in there, which is atmospheric like the smoggy, polluted high rises of the titular geographical entity. "Follow of the Slaughterer", "Blood of Witches" and the "Night of the Drinking Dead" all deliver their morbid, brutal payload with uncaring precision, and these all feature at least 1-2 passing, if familiar riffs, certainly able to thrill fans of similar black/thrash hybrids like Sweden's Witchery. "Rock 'n 'Roller initially seems to betray the rest with a foolish, bluesy metal swagger, but it soon too transforms into a feral blast of evil speed metal that falls in line with the bulk of the material here.

In all, I'd say that Blood of Witches is slightly more entertaining than its predecessor, but the band still doesn't have that extra hellish gasoline it needs to rise above its emulated gods. Witchburner is consistent, yes, but they're consistent at writing songs that aren't liable to pull anyone away from the original pioneers of this sound unless they're dead-set on reproducing the same energy, the same lyrics, paraphrased titles and so forth (though I think "Fist as Order" is a good one). Throw a damned surprise or two in the midst of these songs, and it might help define the straightforward riffing and blasphemous spit of the vocals that much more. As it stands, there are too few moments of carnal elegance, of memorable craft here to give it more than a handful of lessons and forget about it. The enthusiasm is here in spades, but those spades would be better served digging up the songs that are buried six feet beneath the band's boots.