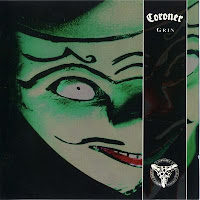 About the time Coroner released their 5th album Grin, there was a noticeable pox upon thrash metal. Almost all of its better acts on both sides of the pond were suffering identity crises, compensating with often empty externalizations into new sounds. To the faithful, this was referred to as a natural evolution or progression, but in reality it seemed more like a desperate attempt to survive in the changing landscape of the 90s, when so many of the fans were bridging into grunge, rap core and other 'alternatives'. This blight fell upon most of the best in the business, including European heroes like Coroner. Mental Vortex might have sent out a few feelers into a newer, groove oriented, minimal expanse of exploration, but Grin more fully embraces the metamorphosis.

So much so, in fact, that without Ron Royce's familiar vocals, it would be difficult to identify this as the same band who produced Punishment for Decadence and No More Color. Where two years prior they were dabbling in less exciting, less showy fare focused on dark, central thrash riffs and a bluesier capacity to the leads, this is a work of simple rhythmic patterns, industrial and world music components, driven steadily by the bass rather than the guitars. I'd compare it to Sepultura's transition from the Beneath the Remains era to Chaos A.D., also in 1993. The bands really don't sound much alike, but the Brazilians also got in touch with their inner, tribal children to spout primitive, powerful hooks and offer the listener variation in themes and instrumentation. Coroner does not do a bad job of this. There's a particular, hypnotic modernism happening here that makes for an ultimately interesting, if slightly disappointing experience.

It doesn't take long to experience the shift in strategy, as the intro is a tribal percussion piece with some didgeridoo known as "Dream Path". "The Lethargic Age" follows, a simple thrash hammering that shows some promise with the opening chords and swells of bass, but then the verse seems incredibly bare, tiny polished chugs alongside the sparse, tinny rock beat. It's sort of catchy, but nowhere near the level of their 80s material, and even the lead seems more like one you'd find on any random hard rock record. The Aliens sample that inaugurates the next piece, "Internal Conflicts" helps to ramp up the excitement, and this is quite comparable to Beg to Differ era Prong, clean thrash with a mechanical vibe; a Sepultura-style groove arriving briefly around 1:15. There's a far cooler groove breakdown at 2:30 where Ron's repetitious vocal line creates a spell of hypnosis, but otherwise I've always found the track lacking.

"Caveat (To the Coming)" features a pretty swell intro with flowing clean guitars and playground samples that create a deceptive bliss before the transition into some bland groove rock guitars, but the bass bridges with the ringing guitars aren't half bad (if predictable). "Serpent Moves" is much the same, once it picks up, however the riffs here are sufficiently snakelike that it stands out as one of the more memorable tracks on the album; and the Voivod-spun "Status: Still Thinking" is likewise a favorite. "Paralyzed, Mesmerized" and "Grin (Nails Hurt)" are both solid, with 1-2 curious sequences found in each, but there is clearly some needless padding there. "Host" once again reminds me of Voivod with the great, off center melodic chords over the thrum of the bass (Nothingface era), and that breakdown at :45 is just creepy; ditto for Ron's spoken word narration (not unlike "Last Entertainment"), but once the guitars pick up it begins to null out.

When you compare Grin to what other noted thrashers like Anthrax, Megadeth, Metallica and Destruction were inevitably going to shit forth over the course of the 90s, then it really doesn't seem all that much of a letdown. It's intelligent and well paced for the most part, just stylistically barren when you consider how explosive the band's earlier compositions had been. Unique enough that it should be listened to at least once, but there is definitely a 'running out of steam' sensation at work here, reinforced in hindsight by the fact that the band would call it quits the following year. To that effect, it seems a bit dull for a swansong. The trio would assemble a few unreleased tracks for the later Coroner compilation, but as far as any future prospects, the fat lady had already begun her incantations.