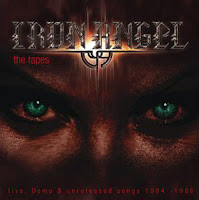 Iron Angel was a largely forgotten band by the 21st century, outside of the lost underground worshiping internet circles, but for a while they actually reformed and had planned on playing live and putting out new material. This ultimately fell apart, since the band never got a steady lineup, but as a possibly positive result, the new interest got a pair of compilations released that included live and demo tracks which might not have been in the possession of those with the original cassettes and LPs. Of course, if you had the CD re-issues of Hellish Crossfire or Winds or War, then you'd already be familiar with the Power Metal Attack demo, and the Legions of Evil demo from 1984 is included on one of two versions of The Tapes (but not the one I'm reviewing here).

This is instead the Brazilian version through Marquee which includes 11 live tracks and then a pair of unreleased recordings from 1985. Both of the sets are from Germany, with the later (1986 from a tour with King Diamond) coming first on the disc. Considering the time period, they sound incredibly fun and raw, especially Dirk's vocals, but we've got a pretty lopsided mix from both of their studio albums: "Metal Storm", "Son of a Bitch", "Fight For Your Life", "Vicious", "Sea of Flames" and "Creatures of Destruction" heavily favor Winds of War, with "Son of a Bitch" appearing twice. From Hellish Crossfire, there are only a few cuts, "Wife of the Devil" , "Legions of Evil" and "Nightmare". That's right, no "The Metallian", nor any of the other classics that defined their better debut. While this makes me want to riot, I'll admit that what they do include at least sounds well despite the aging, and there's no reason an ardent fan of mid-80s German speed/thrash wouldn't find something to enjoy.

The untitled studio cuts, on the other hand, are not all that special, pretty much rehearsals. They both have a huge Judas Priest influence, especially the first, but the second at least has some Metallica in there circa Kill 'Em All. A nice perk, perhaps, but not as impressive as the live offerings. I guess overall one should treat this like the Iron Angel live album they never got the chance to make in their original run, but I'd also point out that the band's next compilation, Rush of Power (2004) has a better, extended offering from one of the same sets, that includes the fucking "Metallian"! So, what I'm saying, is that while that might lack the 1986 lives that sound good here, you may want to pass on this and hand your cash over for that. But, as it's unlikely that any but the most driven collector will be the market for either release, I'm not sure that such caution is warranted. If you're new to this German cult legend, then spend your money on Hellish Crossfire instead. It's awesome, you won't regret it; and if you do, well, roll up your sleeves and meet me in the parking lot.