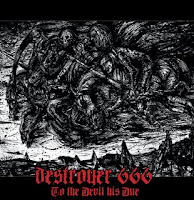 To the Devil His Due was released last year as a limited LP, but seeing as it kicks a fair amount of ass, Hell's Headbangers has decided to bring out a proper CD format. This is effectively a compilation of four 7" EPs that Australian road tyrants Deströyer 666 have issued through the years, gathered in one location for those of us who were either negligent or simply unable to attain the originals. Call me lazy, but I'm a sucker for this sort of product; normally it means that I don't have to blow a wad of cash tracking down music in a format I rarely use. What's better, all of this material is exclusive to the EPs, so you won't find redundancies with the four full-lengths or the original debut EP Violence in the Prince of This World, which is not included. It's not the most complete package out there, and I wouldn't have minded having the Terror Abraxas tracks here, but almost all of these songs are good, so it plays out like a straight full-length, with the obvious differences in production over time.

First are "Satanic Speed Metal" and "The Siren's Call", from the Satanic Speed Metal 7" (1998). The former is straight ripping black/thrash with some audience participation, K.K. Warslut tearing the admittedly cheesy lyrics out over the night; the latter a bit more destructive and serious. It's impressive that they had such a loud and potent mix despite the rawness of the material, but the collection reaches its peak with the 2000 King of Kings/Lord of the Wild material, which is far more atmospheric, melodic, and dense, with KK performing some of his more repressed, death grunts. I also love the haughty backing shouts on "King of Kings" and the loud resonance of the solo. But "Lord of the Wild" is simply one of my favorite Deströyer 666 tunes, bristling with a savage, incessant majesty as the fuzzed leads howl over the crashing chords in the bridge. Also gotta love the swelling ambient outro.

After this comes the ...Of Wolves, Women & War EP from 2002. Yes, the one with the broad getting it doggystyle, and here is yet another of my faves from the band, "Ghost Dance" with its airy, wild melodies Warsluts soul defying venom. "Taste the Poison" is more of a straight blaster, but it too has a pretty great bridge. But "Levens Bloed" returns to the threatening valor of "Ghost Dance", with some crashing background percussion and raw black/death riffing. Lastly, they've included the two tracks from their See You In Hell EP (2010), which are far more polished sounding than the rest. "Through the Broken Pentagram" is solid slaughter with yet another example of a great thrash breakdown, and "See You in Hell", while my least favorite on the album, is swaggering and manly with a lot of backup barks.

Ladies and gentlemen, this is pretty damn cool. A noble ambition. I've not seen the band live in some time, but I'd love it if they'd incorporate some of these in their regular set lists. That it plays out like some 'lost album' that you've never quite heard is just an added bonus. Of the 35 minutes here, 25-30 are mandatory for the Deströyer 666 fan base, and if you're one of the majority who were unable to acquire the limited 7"s from which it draws its content, then it is well worth a purchase.

Posted by autothrall at 8:53 AM