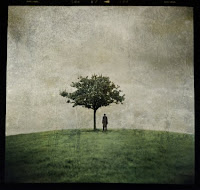 If the cliche 'biting off more than you can chew' was given a tangible musical embodiment, than that corporeal entity's name might damn well be Ana Kefr, a California group promoting their sophomore effort. I haven't heard anything of its predecessor, but The Burial Tree is an overwhelming conflagration of ideas that has almost no precedent in about 30-40 years of extreme music. The intelligence and circumference of such an album is almost unfathomable, but that turns out to be both its blessing and curse, because while the ears will easily accustom to most of the individual threads being woven through its crushing philosophical landscape, the cumulative effect of the album is more one of bewilderment at its variation than staying power.

In other words, I must have shrieked 'how did they do that' a dozen or so times in listening through the album, but rarely did I feel like like hitting rewind to relive those moments. Ana Kefr performs an abomination of modern black, death and thrash metal, with some metalcore styled chug breakdowns (as in the bridge of "Emago"), and additional elements of world music, jazz and progressive rock coursing through its veins like heroin. It's a spastic yet measured collection of compositions, 14 strong and over 60 minutes in length, with the band rarely ever stepping on its own toes as it continues to morph through its dynamic range. They've a pretty talented front man in Rhiis D. Lopez who can snarl, growl, spit and even sing as if he were a living manifestation of limbo, a patchwork of extreme metal, indie rock and collisions stranger yet, and all manner of pianos, synthesizers, female vocals and other bits are sewn into the tumult.

The problem is that the band hurls so much in your direction that they outpace themselves, almost never falling victim to any semblance of repetition, like "Thaumatrope" with its incessant mystique and hammering of melodic death rhythms, or "Monody" with its colossal climate shifts between glazes of melody and progressive swelters. Certain components, like the female vocals in "Monody" feel entirely unnecessary, as if their presence were just to further diversify the aural palette. Tracks like "Apoptosis", "The Zephirus Circus" or the painfully brief "Jeremiad" experiment with acoustics and almost classical or Vaudevillian pianos, but they abandon them too quickly in the rush toward spastic metallic outpourings, and I would have liked to hear a better balance of the tranquility and excess. My favorite track on the album was either "Bathos and the Iconoclast" or the scurrying dementia of "In the House of Distorted Mirrors", both of which slightly rose above the turmoil and better molested my senses. Just the fact that they have a song called "Paedophilanthrope" molests my senses...

Despite my lukewarm reaction to this album, let it be said that Ana Kefr are without a doubt one of the most unique voices on the US metal landscape that I've heard in years, occupying a rare hybrid dimension of Between the Buried and Me, Cradle of Filth, The Mars Volta and Pink Floyd. Yes, you read that correctly. Each player here is technically gifted enough to compete with the maniacal climatology of their compositions, and naturally the sky is the limit for what they could achieve if this energy became focused in on more effective writing. The Burial Tree is well mixed, especially for so wide and busy a range of sound. I might have been left in the dust by this particular construct, but if you're hunting for explosions of aggressive, progressive cross pollination, then the Californians are certainly worth a listen to determine your own response.