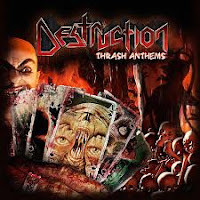 When it comes to bands re-recording their classic material for a new era, my opinion varies greatly. Are they just doing it to cash in on some unexpected, late wave of success? Are they attempting to better integrate a new band member, like a vocalist, to both their back catalog of material and their fan base? Does this new member bring something essential and different to the table? Or does the band honestly think the original version are lacking due to either mistakes made long ago, or the massive leaps in studio technology that have manifest since the original incarnation. Often, the result of such an undertaking is an outright, unwelcome failure, like the recent Exodus CD which affixed Rob Dukes' vocals to their 80s classics, or Bethlehem's attempt to re-release S.U.I.Z.I.D. with Kvarforth's vocals. Sometimes, it's simply unnecessary and adds nothing of value to a band's legacy (Tankard, Amorphis, and many others). But rarely, it succeeds with room to spare, and Destruction's Thrash Anthems is one such example.

We knew this was coming, of course. We could see it miles away. As soon as we spun those new reunion records, All Hell Breaks Loose or The Antichrist, at the turn of the century, we knew they sounded so blasted good that it was guaranteed there would be updates. What stuns me is just how loyal the band is to their beloved back catalog, including a lot of their best material with a rich, stunning new production that will have fans of "Thrash 'Till Death" throwing their horns, and possibly appease the younger crowd who take the evolutionary leaps in recording quality that they've known all their lives for granted; who might listen back on a Sentence of Death or Eternal Devastation and never cease their impetuous whining. But it works. It works, because there is not some new front man strolling in to help rewrite the script. Almost all of these songs were Schmier and Sifringer to begin with, and they remain Schmier and Sifringer here, outside of "Cracked Brain", which we'll remember from André Grieder's brief tenure in the band. The Rosenmerkel era of the 90s is completely ignored, which is no surprise.

Well, the jury has delivered the verdict of 'incredible' here, because almost every track sounds like it's been giving life. About the only regret would be if you're a diehard for the raw mirth of their first few regrets, in which case you might not appreciate the thicker, potent tones. Mark Reign was obviously not around for those early sessions, but I have to admit he doe a thundering job with the material, and he's one of the major reasons that this functions. Surely the band did not have nearly as strong a drummer back in the 80s, not for lack of trying, but simply because drums back then were still heavily rock influenced and not brought forth so powerfully. Classics like "Total Desaster", "Mad Butcher", "Reject Emotions" and "Life Without Sense" are all given new life here, and there are even a few less expected pieces like "Death Trap" (Infernal Overkill) or "Sign of Fear" (Release from Agony) made tremendous in their translation here.

The one exception is, unshockingly, "Cracked Brain". It's given a much thicker, heavier vibe by the mix here, but I didn't find Schmier's vocals as charming as Grieder's were on the 1990 recording, and the lower, brutal notation scheme also loses some of the original's appeal. Not a bad remake, but I'd never feel an impulse to listen to this version. So that the older fans are not completely underwhelmed by what's come before, Destruction has also included two new tracks, a mid paced twister named "Profanity" and "Deposition (Your Head Will Roll)". The former is pretty typical of the band's past album Inventor of Evil, but once the latter gets through its down-pitched narrative intro, it tears out a few half-decent, bombastic guitars and a mildly thick chorus with layered thrash and death metal-style vocals. Neither is all that valuable, but it's cool that they're included so that Thrash Anthems is not just a total retrofit.

In the end, this is one of those very scarce albums which offers value despite its redundancy, and I've found that it sounds maddeningly awesome in my car stereo and headphones. The songs still maintain their thriving, ballistic energy despite the intervening decades, and with this they can match the tonal penetration of the more modern classics from The Antichrist. Granted, a small part of me prefers the originals, but in some of the cases here, like the Eternal Devastation and Infernal Overkill material, I could find myself to appreciate these just as often. The new tracks don't matter much, and obviously nostalgia is better served by dashing back to the originals in all cases, even for new fans (this album doesn't cover everything), but I think this is easily worth owning if just to crank it and bang your head until your thoughts go blank.