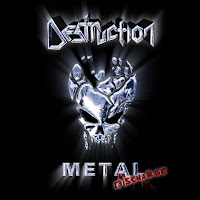 There was absolutely no way in hell that Destruction were going to surpass their 2001 album The Antichrist. Not on its immediate follow-up, and most likely not EVER, so we can't really come down too hard on Metal Discharge for what it is: a series of similar sounding songs that follow in the same punctuation, with the same general production standards and a new drummer in place: Mark Reign. That being said, their 8th-full length (counting The Least Successful Piece of Shit) does maintain all of the band's trademark viciousness with a consistency that shouldn't have crushed the loyal Destruction fan's expectations, and if you were paying attention throughout the 90s, you'll realize that this is far from their worst offense against all creation.

Where Metal Discharge lacks is the songs that immediate grasp the listener, like the legendary "Thrash 'Til Death" or "Nailed to the Cross" from the previous album. "The Ravenous Beast" is fast and manic, and there are some intricate melodic guitars woven into its midst, but it conjures nothing more than the appropriate thrashing momentum. The chorus fails to dominate, and it's but a warm-up for the slightly superior, frenzied title track. This is obviously the self-referential attempt at a new "Thrash 'Til Death", but despite a pretty pumped chorus it just doesn't catch. Do we really picture a crowd of people shouting 'Metal Discharge'? Sure, they'll mock Jesus or celebrate their own favorite pastime with the infamous crowd pleasures from The Antichrist, but I just don't picture them discussing their discharge. Eww. After this, the album takes a turn with the more melodic, melancholic drudging of "Rippin' the Flesh Apart", which breaks momentum with its slower verses, but isn't all that bad.

"Fear of the Moment" and "Mortal Remains" represent some of the stronger tunes on the CD, the former screaming along and leaving bullet cases in its wake, the latter using a catchier, mid paced riff sequence that wouldn't have been out of place on Cracked Brain, but then even these are pale in comparison to the 3rd and 4th seats on The Antichrist wagon ("Bullets from Hell" and "Godfather of Slander"), and the album proceeds to get worse with "Desecrators of the New Age" or "Made to Be Broken", songs I wouldn't be able to remember if you had me trained to respond via jarring electrical stimulation. "Savage Symphony of Terror" is most likely the best on the latter half of the album, with hammering, bloodied brutality coursing through its veins, but it also fails to leap out from the page.

Metal Discharge is not mandatory listening by any measurement, but if you're planning on acquiring it then you'd likely want the extended version, which features a handful of solid covers and some demo material. Schmier and the gang do a naturally bang-up job of "Whiplash" and Iron Maiden's "Killers", and they also tackle "Fuck the U.S.A." by The Exploited, which is, well, not a great song to begin with. Demo versions of "Metal Discharge", "The Butcher Strikes Back" and "Nailed to the Cross" are not necessary in lieu of their official album counterparts, but some might enjoy the remake of "Bestial Invasion" (though the one on Thrash Anthems is superior). With these tracks included, the album falls safely into the 'good' category, but it's really only worth owning if you collect all the band's studio releases. Metal Discharge might have had the unfortunate task of cleaning up after one of the greatest thrash albums in German history, but even had it not, there is not an excess of praise to be said for it.