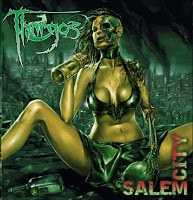 Salem City is not a large stylistic departure from this unknown band's 2003 debut Killfukk, but it's still an improvement in several categories, most notably the production and songwriting. The debut was frenetic and fun, but very dry in places, especially the crisp guitar tone. Here on Salem City, it sounds a lot thicker, and the vocals, while still coming off like a mix of Gerre, Schmier and Tom Angelripper, have a lot more depth in the mix. The leads seem better written and the songs seem to care for something other than sheer velocity. Combine these traits with the band's obsession with the color green, and a disturbing yet strangely seductive cover image, and you've got yourselves one of the better Germanic thrash albums from a newer artist in the 21st century.

What really impresses me is just how the band manages to incorporate the melody of traditional metal into the aggression, giving them a mix of old heavy, speed and black metal aesthetics. This is best heard in a track like "Processing Unit", which is filthy and glorious at the same time, or the chorus of "Just One Step"; even the opening volley "The Kill". They also use a loving selection of samples and synthesizer effects to open most of the songs here, which creates this strange nexus of post-apocalyptic cheese which really endears one to the resonant atmosphere of the album. Of course, they still can burst into hellish lightning on the drop of a dime, like "Silent Service" or "Worship Me", of the very Tankard-style of "The Left Eye of God". But they also have some dirty ass tracks here reminiscent of a trashier alternative to Venom mixed with a bit of Sodom. The vocals only add to the variation, like "Luzifer" where some Tom Araya-styled screams are ripped off into the absinthe soaked night of this creation.

If I were to dissect the individual guitar riffs a little more closely, I must admit that they're not always that catchy of their own accord. In fact, without the verdant, unusual allure created by the artwork and atmosphere, the generally manic pacing and the wasteland thrills, this might not hold up so well. But it seems Thargos have something of an anomaly here, an ability rarely found outside something like Deceased, where they manage to channel their influences into something fluid and fun, yet menacing and obscure. I've found that its charms outlast the debut, and honestly most other old school focused thrash albums created by younger artists in the past 10 years. Breasts. Booze. Half-dead, cheap whores rolling about the filth and smog, a skyline of ominous portents and the promise of sweet excess. Salem City indeed.