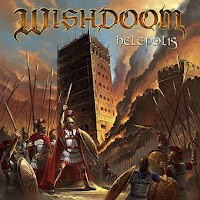 As if their age old empires were once again colliding against the threshold of history, Greeks have been a rising tide in traditional metal of late, or the varied strains therein. Metal on Metal Records has been wise to snap up a few of the brighter bulbs in the batch, namely the prog power/thrashers Heathendom and the even more impressive Wishdoom, who arrive in full force with one of the most epic and entertaining albums in the power/doom field that I've heard in some time. Don't get me wrong, Helepolis is not exactly a manifold of innovation of intricacy, it's just a massive slab of myths, history and fantasy being carried across a titan's backside as it propels all its vastness across the plains of antiquity.

Wishdoom's conceptual style might be comparable to the amazing Italians Doomsword, but they take a different path to arrive at the same destination. Instead of the humbled production values that recall Manilla Road, old Manowar and such, these Greeks occupy the enormous and bright, vaulted aesthetics of European power metal. Huge guitars, synthesizers and plodding, thunderous drums endow the compositions with a larger than life atmosphere that places you straight into a more glorious, mirror universe of the subject matter. Chris Paschalidis has a commanding, well executed tone that falls somewhere between James Rivera, Messiah Marcolin, Eric Adams, Michael Kiske and a slew of other influences, and the riffs take their sweet time to bludgeon you in all their leaden majesty, somewhere between Candlemass and HammerFall if that makes any sense.

Wishdoom covers a lot of the same lyrical terrains as one might expect, with tributes to Robert E. Howards Conan ("Cimmerian Plains - Son of Crom"), Moorcock's Elric saga ("Screaming Blade"), their native mythology ("Zeus the Thunderer") and historical battles (like the Greco-Persian war in "The Battle of Plataea"), but what else would fit such a large envelope of power? Most of the tracks are distinct and powerful, with favorites being the opening anthem "Helepolis", the steady marching of "My Wish Your Doom", and the swaggering monument that is "Guardians of Steel" which should draw forth the squealing, dreaming youth in all of us who used to play swords in his backyard, but neither do I scoff at the crushing course of "Screaming Blade" or the almost gladiatorial welcome of "Crystal World". For nearly an hour of playtime, the Greeks simply do not let you down, but instead drown you in their bright, glinting aspect.

That doesn't make Helepolis perfect, but it's damned fun if you shut down your expectations for anything intricate or even remotely clever. The band's talent lies not in the swordsmanship of its individual members, but how they steadily march as a phalanx and win the day. Battle metal of this nature can become so wistful and tiring these days, it's great to hear some actual enthusiasm placed into it. There are passages where the guitars could be improved, more memorable riffs and vocal lines asserted, perhaps the leads could be tweaked to arrive with more impact than those found here, but in all there is no reason a heavy/doom shouldn't enjoy himself here, that is if he doesn't mind such a bombastic, symphonic and polished mix as opposed to the 70s/80s style organics used by others in the style.