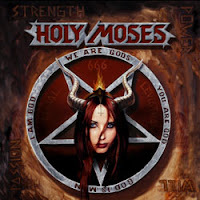 Disorder of the Order might not have been the bees' knees of the Holy Moses catalog, but after so many years of disdainful tripe like Temple of the Absurd or the underwhelming Holy Moses hardcore album No Matter Whats the Cause, it seemed like a godsend. The band was back in the full swing of vicious thrash metal, and even with a new lineup they were primed to shine once more. Here on the followup, Strength Power Will Passion, long time writer and guitarist Andy Classen had finally left the picture for real to focus on his engineering and production. The band had left Century Media and joined Armageddon, who were also releasing a few albums by younger thrash bands. For lack of a better idea, they decided to place Sabina Classen's image on the cover pentagram, sporting a Glen Benton inverted cross forehead brand...

Thankfully, the music is consistent with the feral energy of the previous album's faster tracks, with hints at the 80s greatness of Finished With the Dogs. Songs like "Angel Cry", "I Will" and "Rebirth" all spurt along with a similar crispness to the streams of muted, thrashing menace, but the mix of gang shouts and Sabina's gruesome slather combine for an acceptable experience in headbanging chaos. There are also a few more atmospheric tunes like "Symbol of Spirit" with its numbing melodies, "End of Time" with its powerful, clinical bridge riffing, or "Sacred Crystals" with walls of force that recall late 90s Death. If you can wade past the 10-15 minutes of silence after "Say Goodbye", they also do a cover of Henry Valentino's German hit "Im Wagen Vor Mir" with Tom Angelripper contributing some spit.

Strength Power Will Passion has a fairly clean vibe to it, but it thankfully doesn't cut into the aggression or offset Sabina's delirious venom. Guitarist Michael Hankel (formerly of Erosion) has stepped into his role as songwriter with style, but most of the compositions remain consistent with Andy Classen's work in the past. I can't say that I'd listen to this record over Disorder of the Order, The New Machine of Liechtenstein, and certainly not Finished With the Dogs, but I've never had any real complaint about it. It's volatile and harsh enough to satisfy what I loved so much about their finer days, it just lacks the catchiness in its individual tracking.