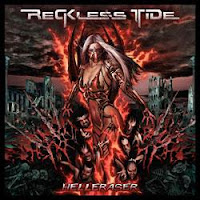 With a cover image like this one, and a credible, exciting album title like Helleraser, I was fully expecting to have my boots shoved down my throat by Reckless Tide's sophomore. Their previous effort, Repent or Seal Your Fate was not entirely void of a curious, modern spin on thrash that incorporated groove metal, varied clean vocals and melodic death influence, but it was lacking intensity and riffs in the long run. Unfortunately, while Helleraser improves upon the production values of that album, and has a half dozen quality guitars scattered about its playtime, it also highly emphasizes the flaws of the debut, with all manner of horrid, generic groove rhythms and radio friendly emo chorus parts that make me want to hurl the morning's coffee straight out my nostrils in disgust.

First, the album opens with some weak songs like "Vicious Tide - Chapter I", which is nothing more than generic groove/thrash mutes akin to Pantera or The Haunted, and then it becomes even more Pantera/Down with "The Preacher" and its bad rock & roll adornments. "Corrupted" opens with a more aggressive, if mediocre fast thrash rhythm but then throws it away on a cheesy Biohazard-like chorus, stealing the thunder from the more gruff vocals being used in the verses. But even more of a crime is "Kleemähendeäbte", a 'reckless' attempt at comedy which opens with some sort of mock-up of pop, then bursts out the most amazing riff on the album...after which it makes some sort of joke on death metal and proceeds to derail itself into covers of "Drunken Sailor", Monty Python's "Lumberjack Song", and other nonsense. What a fucking stupid idea this is, to trash such a promising guitar so! Did someone actually think this contained actual humor? Because it doesn't.

Later on the album you have a few pieces like "House of Cards" and "Entesterone" which are actually fairly reasonable stabs at a sort of melodic death/thrash pop in which there are some actual catchy vocal lines (clean or otherwise) in the chorus. But it's already far too late to find salvation for this scatterbrained trainwreck of an album, and even these have some faux pas like the metalcore sounding death grunts in "House of Cards" that destroy what might otherwise be a Tim Aylmar (Pharaoh) styled chorus with some melodic layering. Helleraser does sound like a million bucks, with clear and distinctly mixed vocals, a decent guitar tone for modern thrash or death metal, but it methodically squanders all of its strengths on pathetic bullshit that makes Repent or Seal Your Fate positively charming by comparison. I realize the idea here was to capture a wider audience than simple thrash or death might have allowed, but its modern and accessible flourishes are poorly scattered to the four winds of forgetful, abysmal composition.