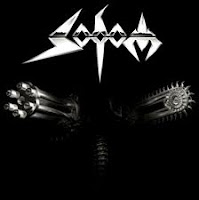 You can generally count on bands who, late in their career, decide to release a self-titled album as a fairly poignant statement of their intentions, but Sodom's stab at this is merely a potent modernizing of the warlike thrash they produced for their last two albums, Code Red and M-16. However, in terms of quality, this is the most ribald and impressive effort of all their 21st century output, with a strong sense of dynamics and songwriting that gradually pulls you into its embrace. Bright, violent, and with some of the most vicious vocals in all of Tom Angelripper's career, Sodom is 43 minutes of passionate craftsmanship which is almost as worthwhile a cure for dysfunctional aging appendages as Viagra.

It does take some time before it fully delivers its payload, though. "Blood On Your Lips" is a momentous opener, with some fast paced roils of acoustic guitars plastered into a steady, battle field hymn of chugged force, squealing feedback, tempered but rousing melodic thrash riffs and murderous constraint in the initial vocals. "Wanted Dead" feels a lot like a modern edition of Slayer's "War Ensemble", and then "Buried in the Justice Ground" takes the pace down with a chord progression that reminds me of "Hangar 18", dispersed with great Angelripper vocals, background samples and a blocky, potent bridge segment. "City of God" actually sounds like something Amon Amarth would write, at least the intro riff, but it's one of my favorite songs on the album, careful and calculated and letting the thick tone of Bernemann's guitars create a resonant, emotional power; while the chorus to "Bibles and Guns" just tears down the fucking house in between the bursts of bass-driven verses.

Elsewhere, "Axis of Evil" concocts a belligerent marching pace to it akin to "For Whom the Bell Tolls", and by this point I have to wonder if Sodom did indeed look towards particular classics that they enjoy when writing this, and if it's not perhaps some thinly veiled tribute?! At any rate, nothing is so close that you could cry plagiarism, and Tom's vocals always create a varied state. I must also admit I love the bridge here with the brief bass breakdown and grooving outburst. Then the album saunters into the straight flush of "Lords of Depravity" and the grimy, huge speed metal tones that inaugurate "No Captures" before the big mosh verse. "Lay Down the Law" is super catchy, with more bass breakdowns and Tom howling all over the place, and the studio incarnation of "The Enemy Inside" (you might have heard it on One Night in Bangkok) finally arrives, though this is my least favorite track on the entire album.

Sodom is an enormous sounding record, something the band has been no stranger to in the decade leading up to it, and that contributes a long way towards its power. As for the riffing itself, it is probably not the strongest in the band's career. I mentioned that many of the songs felt derivative, which is true, but also this seems more of an attempt at creating havoc with sheer atmosphere than the intricate riffs of past classics like "Nuclear Winter", "Sodomy & Lust" or "Agent Orange". In the end, I really like the effect this produces, and it's a reliable go-to if you want to listen to this German legend without having your neck fall off at breakneck speed or your mind flayed by the storming aggression of, say, Tapping the Vein. I have no quips about naming this my favorite Sodom effort since 1990's Better Off Dead.